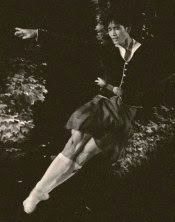 The story of Sokvannara Sar, who began performing traditional Khmer dance in Cambodia as a child; who was discovered by filmmaker Anne Bass, who sponsored his studies at New York's School of American Ballet; and who was brought by Peter Boal from there to apprentice with (2006) and join the corps of (2007) Pacific Northwest Ballet. And with that, I'm afraid I've just spoiled the movie for you. One can hardly blame Sar for not having had a harder life, but this doc is completely drama-free. He's greatly talented, but is he unusually talented? And aren't there lots of dancers with backstories just as interesting? The dance footage is pleasurable and deftly edited (especially a scene of Sar dancing a Philip Glass piano piece with the composer at the keyboard, intercutting rehearsal and final-performance clips), but there's acres of it—because, you eventually realize, there's not much else to say about this guy. For dance geeks only. (NR) GAVIN BORCHERT SIFF CInema: 7 p.m. Mon., May 25 and 4:15 p.m. Tues., May 26.
Posted by CAAI News Media at 8:20 am

We're a gaggle of volunteers and starting a brand new scheme in our community. Your site provided us with valuable information to work on. You have performed a formidable task and our whole neighborhood will probably be grateful to you.

I believe this web site has some very good information for everyone
:D. "When you get a thing the way you want it, leave it alone." by Sir Winston Leonard Spenser Churchill.

We're a group of volunteers and opening a new scheme in our community. Your site provided us with valuable information to work on. You've done an impressive
job and our entire community will be grateful to you.

Write more, thats all I have to say. Literally,
it seems as though you relied on the video to make your point.

You definitely know what youre talking about, why throw away
your intelligence on just posting videos to your blog when you could be giving us something informative to read?

Hi! Do you use Twitter? I'd like to follow you if that would be ok. I'm definitely enjoying your blog
and look forward to new posts.

Hey There. I found your blog using msn. This is an extremely well written article.

I will make sure to bookmark it and come back to read more
of your useful info. Thanks for the post.
I'll certainly return.

Feel free to surf to my page linkbucks bot

magnificent issues altogether, you just received a
new reader. What may you suggest in regards to your put up that you just
made some days ago? Any positive?

Way cool! Some extremely valid points! I appreciate you penning
this article and also the rest of the website is extremely good.


Feel free to surf to my homepage reverse mortgage company

Hello! This is my first visit to your blog!

We are a collection of volunteers and starting a new initiative in a community in the same
niche. Your blog provided us useful information to work on.
You have done a wonderful job!

I’m gone to say to my little brother, that he
should also pay a visit this weblog on regular basis to get updated
from most recent information.

Feel free to visit my homepage ... earn every day

If you would like to get much from this paragraph then you have to
apply these methods to your won website.

Also visit my blog ... how to cheat at paid to click sites

Download All Recent Games, Movies, Apps, Mobile
Stuff and everything else for free at http://freemoviesdownload.
tk

Download all you want for free at http://freemoviesdownload.
tk