Consumer prices fall 5.7pc in May compared with last year 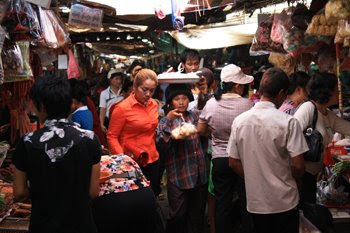 Photo by: STEVE FINCH Customers shop at Central Market in Phnom Penh. CPI inflation stood at just 1 percent in May compared to the previous month, with prices dropping 5.7 percent compared to May 2008.

CPI inflation was 1 percent in May compared with the previous month as prices continued to creep up for the third consecutive month after a decline of 0.1 percent in February.

The National Institute of Statistics (NIS) found that food and soft-drink prices fell 6.7 percent year-on-year, with rice falling 21.2 percent and pork 15.7 percent since May last year. Cooking oil was down 31.1 percent.

Transportation costs fell 15.8 percent in the same period, the figures showed, on the back of lower oil prices - petroleum and gas prices declined 42 percent.

"A small increase in gasoline prices is a good sign for GDP growth," said San Sy Than, director general of the NIS, adding that the low level of oil prices meant that world inflation had stalled, including in more developed regional economies such as Japan, Taiwan and Thailand.

Crude oil has climbed beyond US$71 a barrel on international commodity markets this week, the highest level in seven months.

"If those main goods remain at a very low price, it will not be good for farmers because ... farmers will lose revenue," he said, adding that it was good news for consumers nevertheless, especially given the high commodity prices last year.

This year's CPI inflation in Cambodia represents the lowest in years. Annualised inflation rates mostly stayed close to 5 percent from October 2005 until November 2007, when they began to climb significantly. They reached more than 25 percent in July and August last year when CPI inflation reached its recent peak in the Kingdom, official data show.

Its report attributed a decrease in inflationary pressure at the beginning of 2009 partly to the slowdown in the growth of money supply, with broad supply, or M2, increasing just 0.5 percent in February year-on-year, according to EIU figures. In contrast, six months prior M2 growth stood at 30 percent.

This year's contraction of the money supply was influenced by a reduction in foreign investment, it added, which reduced the supply of foreign currency entering Cambodia.

"A fall in the supply of US dollars entering the economy as a result of a drop in foreign direct investment in the construction sector will also reduce the rate of money-supply growth," said the EIU. "As a result, inflation will slow to an average of 0.5 percent in 2009."

In its June economic outlook for Cambodia, the EIU forecasts CPI inflation will begin to speed up again next year to 4.7 percent.

"Consumer price inflation will accelerate in 2010 in response to the gradual re-emergence of demand-side pressures as economic growth begins to recover and global commodity prices edge higher," it said.
Posted by CAAI News Media at 10:52 pm