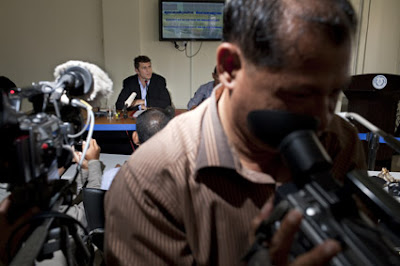 Kambol (Phnom Penh, Cambodia). 10/06/2009: Richard Rogers, head of the Defence Support Section, during a joint press conference with the ECCC spokespersons who said that an investigation was carried out regarding the confidential documents found in a ditch, but the report was still being drafted…
©John Vink/ Magnum

There are days at the court when the substance of the case is pushed so much to the background and repetitions are so countless that the scenario of a lengthy trial appears difficult to dismiss. Debates on the armed conflict between Democratic Kampuchea and the Socialist Republic of Vietnam erred in unforeseen meanderings, with a sluggishness of the judges to bring discussions back to focus. The whole day of Wednesday June 10th was again necessary to exhaust the topic, although the two witnesses invited to testify on this issue did not have the opportunity to show their faces. As a trial management meeting in camera is scheduled for Thursday, the hearing will resume on Monday June 15th, with the examination of the functioning of the S-21 security centre and the mass grave of Choeung Ek, which were both under Duch’s responsibility.

The Vietnamese prisoners: enemies like others
Judge Cartwright continued the examination of the accused on the issue of the armed conflict, started on the previous day. Duch explained that the Vietnamese prisoners were classified into three categories: fighters, civilians and spies. However, these statutes did not affect the fate they were reserved. As long as they were sent to S-21, Duch reminded, they were considered as enemies and therefore had to be smashed in accordance with the policy of the Communist Party of Kampuchea (CPK). The accused recognised he had annotated their confessions, easily managed to spot in a list of S-21 prisoners identified as Vietnamese those who were arrested in Vietnam, and admitted that some of their confessions were read on the Khmer Rouge propaganda radio, the Voice of Democratic Kampuchea.

The judge recapitulated: “Since S-21 started working until January 6th 1979, there were 345 Vietnamese sent to S-21, where they were interrogated, often tortured and eventually killed. Is that correct?” “Yes, it is,” Duch replied. “But I do not want to use the adverb ‘often’ next to ‘tortured’ and I would like to rephrase it as: ‘tortured when that was inevitable.’” Was Duch aware of the existence of international conventions relating to prisoners of war? No, he had never studied issues of international law and later said he discovered the illegal nature of these acts by reading the introductory submission of the co-Investigating Judges of the Khmer Rouge Tribunal. He claimed that when Vietnamese were arrested, he was only executing orders.

When judge Lavergne asked him whether some of these Vietnamese prisoners sent to S-21 were considered as enemies because they were Buddhist monks or Khmer Krom, Duch answered that they were perceived first and foremost as spies. Such was the case for the Khmer Krom, whose resistance movement was, according to Pol Pot, affiliated with the United States, which automatically made them enemies. Each time he gave a Vietnamese name, Duch loosened the syllables and insisted on correcting the interpreters’ pronunciation.

Meandering debates
Before the floor was given to the co-Prosecutors, president Nil Nonn reminded that “the court proceedings had taken more time than planned” and invited the parties not to stray from the issue and not to repeat questions already asked by the judges.

The Cambodian co-Prosecutor started. A few questions later, judge Cartwright deemed useful to recall the president’s warnings: to remain focused on the current topic, that is the armed conflict, and avoid repeating questions which the accused has already answered… The international co-Prosecutor, William Smith, continued, without any more success. Duch repeated: the Vietnamese who ended up in S-21 were not transferred there because of their nationality, but because they had committed an offence or were labelled as spies, similarly to Chinese or Khmer whose fate was decided in the death antechamber, whether the charges against them were valid or not. It was the “routine”, he said in French.

Then, the co-Prosecutor evoked a film shot in S-21, which created confusion among the judges, who claimed they did not know what he was referring to. Finally, the accused was asked to shed some light. He recalled that on the very morning, he mentioned this film shot for purposes of propaganda by a nephew of Pol Pot, who had received special film training in China. The movie shows defeated Vietnamese soldiers, jailed in S-21, making confessions. Granting William Smith’s request, a short clip of the film was broadcast, with a voice-over stating that one of these prisoners disclosed the Vietnamese Communist Party’s plan to install a puppet government at the head of Kampuchea and force the country to join an Indochinese Federation… The interest of this long endeavour by the prosecution was difficult to grasp.

A technical meeting to “make the fastest possible progress in the trial”
As the last quarter of the trial started, the judges announced the agenda for the next day’s trial management meeting, aimed to manage as best as possible the court proceedings and establish mechanisms to work faster: assess the length of the trial, examine the issues related to the availability of the party lawyers as well as administrative and staff issues, determine the schedule of proceedings for the Trial Chamber, and court recesses, review a draft amendment of internal rule 87, relating to rules of evidence, determine a speaking time for civil parties so they can speak directly, without the intermediary of their lawyers, and debate various other issues which may be raised by the parties.

Fast-forward for the end of the hearing
The Cambodian co-lawyer for civil party group 4 resumed his examination, without any direct link with the issue or any relevance. Relief was felt in the audience when he finished and the co-lawyers for civil party groups 2, 3 and 4 explained they did not want to lengthen the debates unnecessarily and therefore had no questions to ask, as the issue of the armed conflict had already been scanned properly. The defence counsel followed the move and added that enough questions had been asked to the accused. The president seemed taken by surprise by this sudden acceleration and asked Duch, as a matter of form, three questions devoid of interest before adjourning the session.
Posted by CAAI News Media at 11:53 pm