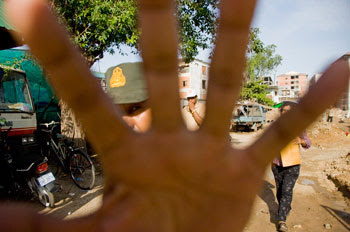 A security guard attempts to prevent a reporter from taking a photo of the Borei Keila community facing imminent eviction. Reporters and rights groups were not allowed inside on Monday, but some residents say even though they have been promised on-site apartments, they are worried they will be made homeless after their homes are demolished.
Full Story
Posted by CAAI News Media at 7:38 am