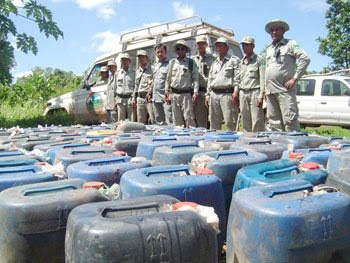 Officials say 5.2 tonnes of illegal sassafras oil taken from a house in the Phnom Samkos Wildlife Sanctuary in the largest confiscation yet from an area once known as a haven for oil harvesters

A GOVERNMENT-led raid has resulted in the seizure of 5.2 tonnes of sassafras oil, a precursor in the manufacture of the drug MDMA , or "Ecstasy", in a wildlife sanctuary in the Cardamom Mountains, a conservation group said Monday.

Fauna and Flora International (FFI) said that Ministry of Environment rangers at the Phnom Samkos wildlife sanctuary had received an anonymous tip-off about a hidden cache of oil at a property in Veal Veng district, leading them to raid the empty house on June 12.

The oil, which was extracted from the rare mreah prov phnom tree and filled 142 large drums, could have produced 44 million Ecstasy tablets, estimated to be worth US$1.2 billion, according to a statement from FFI.

"This is the largest seizure of its kind inside Phnom Samkos Wildlife Sanctuary and represents a major success in our ongoing efforts to rid the sanctuary of this illegal activity," said Tim Wood, an FFI wildlife sanctuary technical adviser.

Pursat provincial police Chief Sarun Chanthe said Monday that no arrests were made in the raid.
"We don't know when it was hidden or who the owners are," he said.

However, conservation experts involved in the manoeuvre said they believed the land was owned by the military.
"The oil was found right next to a military base," Wood said Monday.

FFI staff estimate that, at the height of the industry in 2006, there were at least 75 mreah prov phnom processing factories in the Cardamom Mountains.

This number has dropped since the FFI began intervening, but "numerous factories have since re-emerged due to high demand for the substance, orchestrated by ‘highly organised trans-national crime syndicates'", Wood said.

He lauded residents for revealing the cache of oil, saying, "Local people do not stand to benefit from these crimes, and rightly do not stand back and see their natural resources stripped from their ancestral lands. Their support is hugely valued".
Posted by CAAI News Media at 12:00 am