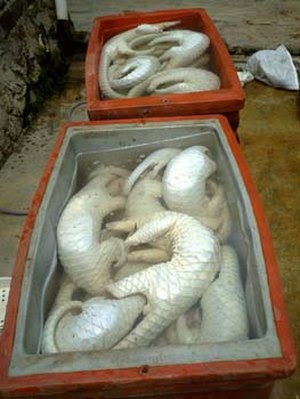 Singapore - Rising demand for pangolins, mostly from mainland China, compounded by lax laws is wiping out the unique toothless anteaters from their native habitats in Southeast Asia, according to a group of leading pangolin experts.

Illegal trade in Asian pangolin meat and scales has caused the scaly anteaters to disappear from large swathes of Cambodia, Viet Nam and Lao PDR, concluded a panel of experts whose findings were announced today by the wildlife trade monitoring network, TRAFFIC.

China has a long history of consuming pangolin as meat and in traditional medicine, the report states. Due to continual demand and the decreasing Chinese wild population, in the past few years pangolin smuggling from Southeast Asia has resulted in great declines in these producing countries wild populations, as well.

Although the animals are protected under national legislation in all Asian range states, and have been prohibited from international trade through the Convention on International Trade in Endangered Species of Wild Fauna and Flora (CITES) since 2002, this legislation is having little impact on the illicit trade.

Pangolins are the most frequently encountered mammals seized from illegal traders in Asia, and are highly unusual in not possessing teeth.

Pangolin populations clearly cannot stand the incessant poaching pressure, which can only be stopped by decisive government-backed enforcement action in the region.

According to pangolin hunters and traders, there are so few pangolins left in forests throughout Cambodia, Viet Nam and Lao PDR, they are now sourcing animals from their last remaining strongholds in Southeast Asia and beyond.

Pangolins save us millions of dollars a year in pest destruction, says Dr Simon Stuart, Chair of the IUCN Species Survival Commission. These shy creatures provide a vital service and we cannot afford to overlook their ecological role as natural controllers of termites and ants.

The key to tackling the pangolin crisis is better enforcement of existing national and international laws designed to protect pangolins, better monitoring of the illegal trade, and basic research to find where viable pangolin populations still exist and whether ravaged populations can recover given adequate protection, according to the report.