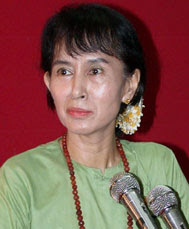 Counterparts from Cambodia, Indonesia, Singapore and Vietnam, whom he had contacted, had expressed positive views on progress in Burma, he said. Kasit raised the idea last week about seeking a pardon from the junta for Suu Kyi after she was sentenced to another 18 months' house arrest.

Senior Asean officials will meet tomorrow and on Thursday in Jakarta to discuss a Thai-drafted text for the pardon request, he said.

"We respect Burma's justice system but are concerned about unity of Asean too, since Aung San Suu Kyi's case makes Asean and Burma a common target," he said.

Some Asean ministers suggested that Kasit lead a group to visit Burma to raise the issue with junta leaders.

Kasit yesterday met American Senator Jim Webb to discuss the issue. Webb had just returned from Burma where he managed to have American national John Yettaw - who swam across Inya Lake to Suu Kyi's residence in May - freed.

Webb met junta chief Than Shwe and Suu Kyi while in Burma and asked the military-run government to free her. Webb said he did not discuss Asean's plan with Kasit, who chairs the regional grouping, but said in Bangkok "it is valuable if Asean communicates that particular concern to the government of Myanmar [Burma]."

Later, Webb, chairman of a US Senate sub-committee on East Asia and the Pacific, met with Prime Minister Abhisit Vejjajjva yesterday to discuss any Asean moves to save Suu Kyi.

Abhisit briefed him on Asean's way of engaging the military government without interfering in its domestic affairs, according to spokesman Panitan Wattanayagorn. Thailand and Asean have opposed use of sanctions on Burma to get Suu Kyi freed, Panitan said.
Posted by CAAI News Media at 8:16 am