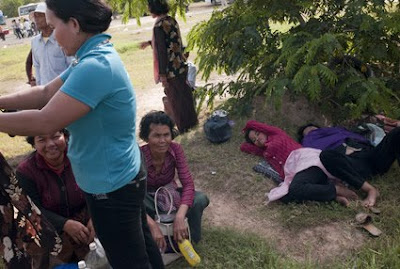 It was one in the morning in Bakong district, Siem Reap province. Surprised by the unusual activity, in the middle of the night, a few slightly dazed dogs barked as the villagers walked by. Most of them were already up and hurried to two buses, chartered specially for them by the Extraordinary Chambers in the Courts of Cambodia (ECCC), in charge of judging former Khmer Rouge leaders. Direction: the Cambodian capital, Phnom Penh. In total, during that night from August 5th to 6th, nine buses came to pick up the residents of various districts in Siem Reap so they could attend, at least for one day, the trial of Duch, the former director of detention and torture centre S-21. The trip was organised “upon the initiative of a villager,” insisted Dim Sovannarom, the new tribunal’s spokesperson. Story of this visit, which took place on the day U.S. historian and expert on the Khmer Rouge regime, David Chandler, testified.

From television to reality
Kham Lon was “only a simple citizen,” resident in Bakong district, in Siem Reap, the most touristy province in Cambodia thanks to the Angkor temples, but also one of the poorest in Cambodia. He did not lose any relative during Pol Pot’s sinister rule and, he claimed, he felt no personal desire for revenge against the Khmer Rouge leaders. He started following Duch’s trial on television and one day, he decided to call the ECCC to inquire about the possibility for all villagers to attend the trial at the court, in Phnom Penh. After a few phone conversations with Dim Sovannarom, the deal was sealed: the tribunal agreed to send buses to Bakong and organise a visit in the heart of the institution in charge of judging the former Khmer Rouge leaders still alive.

The villagers themselves remained to be convinced. In a few days, Kham Lon managed to gather over 450 people. “This trip was organised in the interest of my neighbours,” he explained. “You can follow the trial from time to time when it is broadcast on television, but I thought it would be even better if we had the chance to see it with our own eyes. You have to do it at least for the people who died during that period, so their spirits know that a tribunal has finally been created to defend their cause.”

A trip to appease the victims’ anger
Chea Hann, whose father was executed by Khmer Rouge soldiers, was outright reluctant when Kham Lon first talked to her about his project. The widower feared venturing out on the roads, far from her village, due to her fragile health, but most of all, she said she felt somewhat indifferent to what was happening at the tribunal. But Kham Lon eventually convinced her, by evoking her father’s memory. That night, Chea Hann was therefore ready to leave for Phnom Penh. For her, it was less about taking an interest in the judicial process rather than accomplishing a kind of pilgrimage aimed to appease the anger of her father’s spirit, who was killed without reason or justice. “We still don’t know where he was executed. Without his body, we were never able to organise a ceremony in his honour. Going to the tribunal is a way to tell his spirit that we are thinking about him,” Chea Hann confided, as she was about to leave for the capital. However, as a fervent follower of Buddhism, she feared that her hatred might resurface when she saw Duch’s face, a feeling that was bad for her karma.

Forgetting rather than hating?
Ta Chhoy, her neighbour, observed the bustle without participating. Kham Lon failed to convince him to go to the tribunal with the other villagers. For him, the Khmer Rouge regime was part of the past and he was convinced that nobody could be strong enough to succeed in controlling one’s anger or desire for revenge before former Khmer Rouge. In order to preserve his karma from wrong thoughts or actions, Ta Chhoy therefore preferred to burn the bridges with the past and follow the Buddha’s path to lead a better existence in his next life, he explained.

Trip to the unknown
Nonetheless, a crowd was bustling that morning, under the direction of Kham Lon, to get to the buses. At 1.30am, the instigator of the visit lectured the latecomers, who hurried along the village’s road. They rushed to the buses under the faint moonlight. Some had no time to button up their shirts, others boarded without their shoes. But Kham Lon was not joking. All the buses had to leave Siem Reap at 2am in order to arrive at the tribunal by 8am, on time for Duch’s trial that starts precisely at 9am. Eventually, the schedule was respected and the convoy started its journey, with dozing villagers on board.

As the sun slowly rose, the passengers got a glimpse of the tribunal’s roofs. They still did not know anything about that place. Most had never set foot in the capital of Cambodia, Phnom Penh. Only rare ones had ventured far from their village. Some complained of the unpleasant smile of the bus, others started seeking medication for headaches as soon as they arrived, others still asked if there rooms available to rest… Result from travel sickness and lack of sleep or psychosomatic effects related to the apprehension about meeting, for the first time, an important figure of the Khmer Rouge regime? It was probably a little of both, Kham Lon admitted, while insisting that villagers were not used to such a different environment from theirs.

“He is so handsome!”
Restored by a meal carefully prepared on the previous day, the visitors gradually recovered their strength. They queued at the entrance of the tribunal, waiting to go through the mandatory security checks. At the second control point, outside the public gallery, the villagers were in disbelief that their water bottles, cigarette packs, tiger balms and various lotions were taken away from them… A few minutes before the trial opened, all were finally present in the gallery: they occupied nearly all the 500 seats. At 9am, the curtain opened. The public rose as the red-robed judges arrived. The silence was broken by a few whispers. The villagers started looking for the accused, Duch. It took them a few minutes to manage to identify him, among the lawyers and clerks. Comments came from every direction: “He does not look as white as on television,” “He is so handsome,” “He looks smart. I heard he used to be a professor…”

Translation, jargon, air-conditioning...
Those who were sat from the dock complained about not seeing the face of the accused better, as the television screens on the walls of the public gallery favoured the witness and the judges interrogating him that morning. In addition, there were two more difficulties: translation problems and the use of technical terms, most of which were completely incomprehensible for farmers little familiar with legal jargon. The witness of the day was a foreign historian, American David Chandler, who spoke in English and whom the villagers somewhat struggled to follow despite the translation. 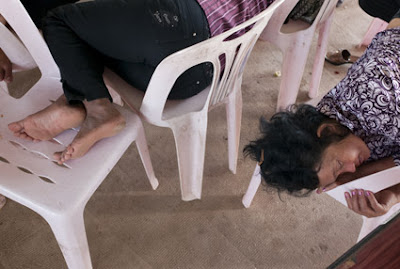 Kambol (Phnom Penh, Cambodia). 06/08/2009: For many villagers, this trip to the tribunal was their first far from Siem Reap. A somewhat exhausting experience…
©John Vink/ Magnum

After the first break, several visitors from Bakong decided not to return to the public gallery, in spite of the loudspeaker call made by the ECCC Public Affairs chief, and to stay outside… where it was warm, as they were indisposed by the air-conditioning which perverse effects they discovered. The tiredness of the trip was also felt: some took a nap on the chairs of the cafeteria.

Early departure
The hearing was suspended every hour and a half. At 3pm, it was the third recess. For Kham Lon and the villagers, the time had already come to leave the tribunal, in order not to return too late to the village in Siem Reap. They therefore missed the fourth part of the trial day, when they could have finally seen and heard Duch talking, as he was to comment the witness’ testimony and give his version of events.

The day reached its end and the villagers made a first assessment of this quick visit. The experience was deemed positive, but too short to really learn something and engage in the trial. Kham Lon was left wanting more. Disappointment was visible on his face. As someone who has followed the Khmer Rouge tribunal for long, he did not appreciate the words of the day’s witness, David Chandler. In Kham Lon’s view, the historian had not put enough blame on the accused. On the contrary, he felt that the U.S. researcher sought to exonerate Duch. “This testimony brings elements that will help exonerate Duch. See how he smiles, without any shame. It’s normal because he knows that all these witnesses are on his side. Is he taking the victims for fools?,” this observer noted with indignation.

A first step
For her part, Chea Hann appreciated the chance to live this experience, but she also had mixed feelings. “It is a shame we have to leave already. I am going back with a troubled mind, because I don’t know if Duch will be condemned or not. As long as he is not condemned, I will not be at peace.”

Due to lack of money, whether from villagers or the tribunal both unable to fund a longer stay, Bakong residents had to content themselves with this brief glimpse of the tribunal for a few hours, which was somewhat frustrating. Reach Sambath, in charge of the tribunal’s public relations, said he understood the villagers’ frustration. But he stressed that the visit already represented a first step towards a greater participation of the population in the ongoing process to give justice to victims of the Khmer Rouge: “You have to follow at least six or seven hearings to be able to understand the proceedings and the – very complicated – history of the Khmer Rouge regime.”

(translated from French by Ji-Sook Lee)
Posted by CAAI News Media at 7:42 am