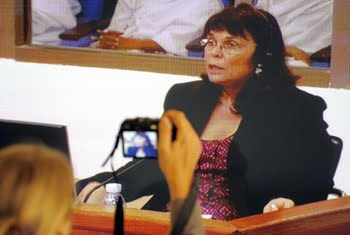 Photo by: AFP
A photographer (left) takes a picture of a television in the press room showing live video footage of French witness Martine Lefeuvre, the wife of Ouk Ket, a former Cambodian diplomat who died at Tuol Sleng.

THE WIFE of a Cambodian diplomat who was imprisoned at Tuol Sleng and later executed told the Khmer Rouge tribunal on Monday that she believed Kaing Guek Eav relished his duties as prison chief.

"If one can't call this enjoying a dirty job, then please tell me what else can it be?" civil party Martine Lefeuvre, 56, said of the accused, alias Duch.

"The death of others was in fact his daily food."

Duch has previously said that he would have been killed if he had not carried out interrogations and executions ordered by top Khmer Rouge leaders, but Lefeuvre suggested she did not find this argument convincing.

"For me, he should have committed suicide, because if he was afraid of dying himself that is not a reason for him to continue torturing and to continue murdering," she said.

She went on to call the prison chief's actions "unforgivable" and asked judges to give him "the maximum sentence".
Duch, 66, faces life in prison.

When the Khmer Rouge came to power, Lefeuvre lived in Dakar, Senegal, where her husband, Ouk Ket, worked at the Cambodian Embassy. He returned to Cambodia after the Khmer Rouge called for intellectuals living abroad to help rebuild the country. After being contacted by Khmer Rouge officials in April 1977, he travelled to France with his family before leaving them and flying to Phnom Penh that June.

Lefeuvre recalled that her husband dismissed concerns he would be in danger in Cambodia.

"He looked at me and tapped my cheek and said, 'But honey, Cambodians are not savages.' And he was so sure of himself."

Lefeuvre said she learned what happened to Ouk Ket when she travelled to refugee camps along the Thai border in late 1979. There, she encountered a friend who had worked at Tuol Sleng for four months after the fall of the Khmer Rouge earlier that year. He told her that Tuol Sleng was "an extermination camp", and that he had seen Ouk Ket's name in files there, she said.

In 1990, Lefeuvre received a letter from her mother-in-law informing her that only four of her 11 Cambodian family members had survived. They visited Cambodia the following year and went to Tuol Sleng two days after they arrived.

"And I have a hard time telling my children to leave this place because their fists are clenched and they are clenching their teeth before such a quantity of horror," she recalled.

Lefeuvre's testimony was supplemented by that of her daughter, Ouk Neary, another civil party who also described the visit to Tuol Sleng.

"We were drawn to these faces which stared at us one after the other," Neary said.

She told the tribunal she had been observing Duch "for several months" and had decided that she had "no interest" in him. Beneath his "obsequiousness [lies] the cynical and bloodthirsty brute that I know", she said. "I see the accused taking responsibility without ever soiling his hands."
Posted by CAAI News Media at 9:30 pm