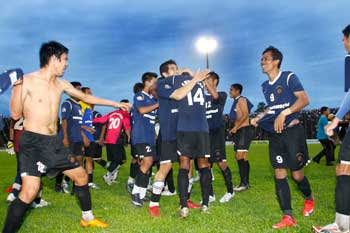 MOMENTS after the final whistle Saturday that signified the third Cambodian Premier League title for Naga Corp, manager Michael Thachnen was rounded up by his players and thrown into the air in jubilation. “I am so happy,” beamed Thachnen. “At this moment, I am just so exuberated and short of words.

“We had an inconsistent performance throughout the season, and so not many people gave us the chance to emerge as champions. We have always been in the top four, but today [Saturday] we have made it happen and proved that we are worthy champions.”

Thachnen paid tribute to his team’s efforts in clinching this year’s CPL championship. “I am proud of my players,” he said. “We worked together and didn’t allow this chance to slip by us, and I am dedicating this victory to all of them for their cooperation.”

Winger Meas Channa was also delighted with the victory. “I am very happy and excited to be a part of this winning team,” he grinned. “For two years now, we didn’t win anything. It feels good to be the champions again.”

Skipper Om Thavarak shared his teammates’ joy during the post-match press conference. “We played well, we won through hard work and we hope to move on from here,” he stated.

Two-goal hero and Naga’s top scorer Sunday Okonkwo was proud his goals made the difference in the match that was heading for a penalty shootout. “I promised to find a way to break Khemara’s solid defence, and I did it today,” he remarked. “I am so happy to win for my team.” 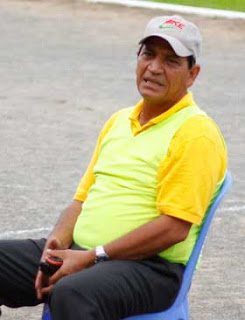 Khemara Keila manager Salang Kang thought his side “put up a good fight” in the final.

Meanwhile, Khemara Keila coach Ung Kanyarith, who had won the trophy as a player for the club in 2006, was visibly distraught at the end of the epic encounter. “My midfield was poor today,” he said, fighting back tears. “They couldn’t connect well with the attack, and on several occasions [Kuoch] Sokumpheak didn’t get enough service.”

Lanky Nigerian forward Nelson Oladiji, who netted 14 goals during the regular season, looked a shadow of himself throughout the game. “If we had converted the chances that fell to Nelson earlier in the first half, we probably could have gone on to win the game,” Ung Kanyarith opined.

Khemara manager Salang Kang was more upbeat. “I felt we deserved to get something from the game, and we can take a lot of positives from a good performance,” he asserted. “My boys put up a good fight, but I think we were just unlucky today not to have converted the chances that came to us.”

Captain Kouch Sokumpheak could only muster a few words through his disappointment. “I don’t know what to say, I feel so sad,” he said. “I thought we would win, but we lost.”

Preah Khan Reach’s technical director Prak Sovannara was satisfied with the team’s 2-1 win over last year’s champions Phnom Penh Crown Saturday, in the third-place playoff. “It was a good game, and we are happy to have finished third,” he declared. “I wanted [us] to be the champions, but it was not to be, so we go home with third instead.”