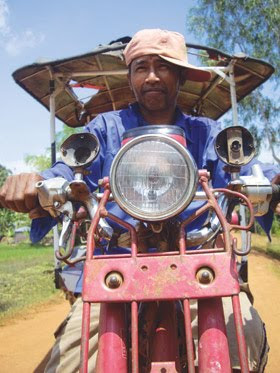 The 10-day journey won’t involve any easy riding, and with potholed roads may be less comfortable but more adventurous.

Not for the faint-hearted but an event that attracts those in search of an adrenaline rush.

Donating to charities by volunteering, such as working with the disabled and under-privileged while on holiday, is an increasing trend among travelers, as is eating at restaurants run by former street kids, or buying products made by the less fortunate or disabled. As the recession takes its toll on NGOs, some organisations are taking to less conventional means of attracting the tourist buck.

Topping the list of random fundraising initiatives is MaD Adventures, which in August launched the MaD Tuk Tuk Challenge, a 10-day January event in which participating teams will travel by tuk-tuk from northern Cambodia to the Vietnamese border. Not an entirely novel idea as similar rickshaw rallies have been organised in India for some time, yet MaD Adventures’ director, Phillip Starling, says he’s never heard of anything like it on Cambodian soil. According to Starling, Cambodian tuk-tuks are unique as they differ in size, design and structure from the ones found in India and China. “This makes the course very different and much more difficult. The MaD Tuk Tuk Challenge is about doing projects en route and focused on raising funds for charity.”

“We’ve been working on ideas to help raise awareness and funds for our cause, and given that tuk-tuks are part of our daily life in Cambodia, it made sense,” Starling said, clarifying that MaD Adventures Limited is the fundraising arm for MaD – Making a Difference for Good!, a Siem Reap-based NGO managed by Palynath Ham.

The rest of the project – driving a pimped-out tuk-tuk across the country on potholed roads – may be less attractive and comfortable, but certainly appeals to those with an adventurous streak. “The aim is threefold: to raise awareness of our cause and what it is really like in Cambodia; to do development work in the communities we visit, stay or pass through; and lastly raise much-needed funding for MaD projects to allow us to be self-sufficient,” Starling explained.

He says he hopes teams from all over the world will participate in the rally, which is set to start January 20. He adds that he looks forward to the teams bringing a variety of skills to the convoy, which should prove useful during the many challenges participants will face en route. Though Starling remains secretive as to what the challenges are, one thing is certain – the 10-day journey won’t involve any easy riding.

“We will have our outriders cover the following day’s track the afternoon before so we will have at least an idea of track conditions, but apart from that it is about testing the teams’ endurance, their ability to deal with the unknown and unexpected, and to work together to get through the day,” Starling said. “Breakdowns, accidents, bumps, bruises, blisters and more will be guaranteed,” he added.

Not for the faint-hearted then, but undoubtedly an event that will attract those in search for an adrenaline rush. Participation doesn’t come cheap, however – minimum registration and starting cost is US$3,300, with extra for tricking out the tuk-tuk, plus food, fuel and other costs. MaD also hopes to raise funds from sponsorships and advertising and through the sale of television rights.

Despite the cost, Starling hopes to see not only international but local talent enter the rally, too. Starling aims to secure further sponsorship from overseas companies wanting to send a team and hopes to have more international support from corporations, schools and NGOs.