Scenic and safe, Taiwan shines as a destination 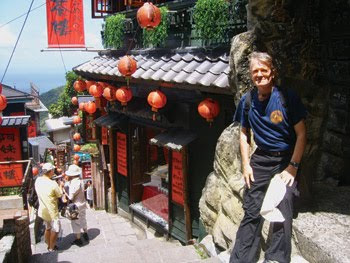 The narrow lanes of Chiufen are lined with charming teahouses and local snack shops. 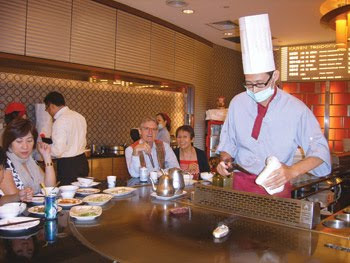 
Travel between Phnom Penh and Taipei:

There are nonstop flights by China Airlines and Eva Airways for around $700 return. A better bet is to take Air Asia from Phnom Penh to Bangkok and on to Taipei for about $300 return.

Come for urban and natural wonders, stay for the steamed soup dumplings

Only a handful of people think of Taiwan as a travel destination – few until they have been there before. Then, like myself, they often return quickly. And for good reason: It is scenic, safe, efficient and friendly.

The capital, Taipei, is one of Asia’s most vibrant cities, with great restaurants, funky bars and shopping to beat the band. And its surrounding countryside offers jagged mountain ranges, inland lakes, steaming hot springs, and a majestic, unspoiled coastline.

The first thing that impresses is the wonderfully efficient airport. Don’t misunderstand: There’s nothing elaborate or stylish about the place. It’s just sheer efficiency – quite unlike the shopping-mall chaos of airports like Bangkok or Kuala Lumpur.

The airport also has a fabulous information centre where you can pick up all the maps and brochures you’ll ever need before you head into town.

I always choose to stay at Taipei’s Brother Hotel, partly because it offers an efficient and affordable airport pickup and has a great central location right next to a Metro stop and lots of excellent restaurants, including one of my favourites – the Kunming Islamic Restaurant just across the road. But don’t let the culinary delights and the hotel’s treats detain you – there are sights to be savoured.

Start by going up the amazing Taipei 101, still the world’s tallest building at 439.2 metres (1,440.9 feet). It features a series of eight segments of eight floors each, because in Chinese culture the number eight signifies abundance, prosperity and good fortune.

Taipei 101 also has the world’s fastest elevator, which zips you up to the top at more than 60km/h.

After taking in the breathtaking view, check out the stylish shops, and then head down to B1, where there’s a jewel of a spot called Karen Teppanyaki that serves mouthwatering grilled steaks, ribs and seafoods.

Thus fortified, it’s time for Taiwan’s fabulous National Palace Museum, nestled in the city’s hilly northern suburbs, and easily reached via the Metro to Shilin and a bus outside the station that drops you off at the museum.

There are free guided tours in English at 10am and 3pm if you want to get into the details, or else you can just wander around the museum’s three floors at your leisure. 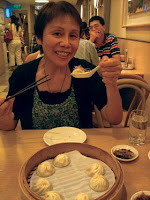 The collection on display beats anything in mainland China for the simple reason that when General Chiang Kaishek’s Kuomintang were facing defeat in the civil war of the late 1940s, they shipped all the best treasures over to Taiwan, leaving only the “dregs” for Beijing. Among the highlights are dazzling gems from the Qing Dynasty, and painting and calligraphy galleries.

After this dose of Taiwanese culture, indulge yourself at Din Tai Fung, which is famous for xiao long bao – steamed soup dumplings. Try the exquisite thin-skinned pork and vegetable variety, you’re sure to order seconds.

Next morning, it’s time for some fresh air and exercise, so take bus 260 from Taipei Main Station to the fabulous jagged peaks and winding trails of Yangmingshan National Park. The 40-minute ride takes you up 700 metres, where it’s much cooler and where the views are spectacular.

After your hike, head over to nearby Beitou to sample the hot springs. The steaming jade-coloured water is said to be good for arthritis, rejuvenating skin and other ailments. It is truly hot, so take your time slipping in and let your aching muscles slowly recover.

The town of Beitou, formerly a red-light district but now family-oriented, is full of hotels and restaurants. A good spot to stay is the secluded Hotel I-Tsun, tucked down a side lane, where the hot spring-fed baths are open for guests 24 hours a day.

From Beitou, it’s a short Metro ride to Danshui, where you can get the bus round to the incredible rock formations in the Yeliu Geopark. One formation is shaped like Cleopatra’s head and is reputedly more than 3,000 years old.

Yeliu’s other attraction is the fantastic selection of seafood restaurants that draw Taiwanese from miles around. Try the steamed mussels and grilled fresh mackerel – you won’t want to leave.

But you must proceed and the next stop is the nearby historic gold-mining town of Chiufen up in the hills overlooking the rugged shoreline of Taiwan’s Pacific coast. The gold ore has long since given out, but the town’s narrow lanes are lined with traditional teahouses, souvenir shops, art galleries and temples.

Chiufen, with its fantastic views and clean mountain air, is full of guesthouses and hotels, so you’ll have no trouble finding accomodation. You can take a bus to Juifang and from there, a train for the 40-minute ride back.

This magical trip can easily be done in a week.