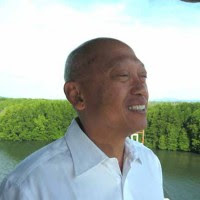 Mr. Putu Kamayana, ADB Country Director for Cambodia, smiled where he visited Cambodian mangroves in Preak Prasob in Koh Kong province on Thursday. In Koh Kong province alone there is more than 20,000 hectares of mangroves, which is protected by the government's sub decree, where a number of local families make their livings by selling food and souvenirs for tourists.

KOH KONG, Cambodia –Asian Development Bank (ADB) led delegations toured the Southern Coastal Corridor, which covered the southern part of Thailand through the Southwestern Cambodia to Southern Vietnam, aimed to promote the improvement of trades among the countries, said the Bank’s country director for Cambodia on Friday.

Putu Kamayana told DAP that “our efforts through this trip is to see what more potential there is and what more can be done.”

The group of 28 delegations including the US ambassador Carol Rodley to Cambodia, ADB country director for Vietnam, foreign diplomats as well as the representatives of the development partners from Australia and European Union and others.

The tour study began on Wednesday in Thailand in Chonburi province where they visited the country’s biggest seaport Laem Chabang Port and traveled through Trat province before arrived late in Cambodia’s province of Koh Kong.

The group was pleased with the brief made by the deputy governor, Dom Yuk Hean, that this coastal province of Koh Kong has made lots of progress of development over the last ten years in improving infrastructures, which is the key factor attracted tourists to visit the province.

Kamayana, of the ADB, was impressed with the authority’s contributions in protecting the forest of the Cardamom Mountain as well as the mangroves.

“We have been working with the community who depends on forest for their livelihoods, we work with them to protect the forest and at the same time we also helped to improve their livings,” he told the deputy governor after the dinner.

The delegates listened attentively on Thursday the presentation made by the Deputy Director General, Ma Sun Hout, of Sihanouk Ville Autonomous Port, about the constructions and the progress of the port operation.

Arrived late in Kampot from Sihanouk Ville province, the group spent overnight in Kep where they were warmly welcomed on Friday by the governor Has Sareth and his deputy before the beach in Kep under the shining morning and breeze from the Gulf of Thailand.

“We are seeking the private sector to develop the Kep beach... to attract more tourists,” the governor Has Sareth told the delegations before heading off for Vietnam.

Kamayana did not say how much money the ADB would finance to upgrade as well as expanding the routes which links Koh Kong to Sihanouk Ville to Kompot and Kep. But an expert, who wished not to be name, said that the project would cost an estimated $200 million.

“We not improving the whole section, we are improving the priority one at different region that we go through and we expect that the benefit will become incrementally,” said Kamayana.

He said ADB has been invested large amount of money in the Cambodia’s roads improvement, but more need to be done.

“ADB is promoting the improvement of the roads along this route in order to promote the economic development and cooperation between the countries... the connectivity among the countries through these roads,” he said.

The tour to end on late Friday (Nov. 20) in South Vietnam where they visited the industrial zone in Ha Tien City and Kien Long and Ca Mau province.

Kamayana said that the group shared views “the importance of promoting the cooperation between these countries and promoting the benefit of having economic growth along these transport corridors because they will benefit many people along these routes and to promote agricultural development and bring more jobs.”

“We think this will have the benefit for the Mekong countries to help them growth together to reduce poverty,” he told DAP before he set his foot on Vietnam’s border.

A Cambodian local business woman Keathos, 27, who owned a coffee shop at Prek Chak border checkpoint in Kampot province which borders with Vietnam, said “it is too early to say what I would benefit from the coming project”, when asked how much does she expect the Southern Economic Corridor benefit the locals.

(Reporting by Ek Madra who accompanied the delegations)