Coming in off the streets

Poverty and the legacy of civil war has had a corrosive effect on family life in Cambodia, leaving many children homeless and vulnerable. But children's support projects offer hope of a better future 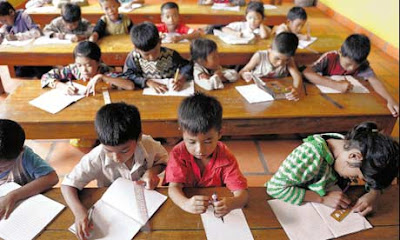 Cambodian children study in a classroom at one of the M’Lop Tapang organisation’s schools in Sihanoukville. Photography by: Tang Chhin Sothy/AFP

Srey Mom recalls: "My father burnt the house down one evening, and after that me and my brother slept in the forest. I was so scared I couldn't sleep and he would cry all night because he was hungry." Srey Mom's father was a violent alcoholic, unable to pay the rent, and her mother, who was addicted to gambling, attempted suicide many times. With her family left homeless and hungry, Srey Mom joined almost 2,000 working children who spend their days and nights on the streets and beaches of Sihanoukville, Cambodia's growing resort town.

Over 36% of Cambodians live below the poverty line and families have been drawn to Sihanoukville by the economic promise of a growing tourist trade and work in the country's only deep-water port. In reality, the average income of a family of four living in the town's slums is $2 a day. With families who are unable or unwilling to support them, children work on the town's streets, beaches and slums both day and night, and are vulnerable to physical and sexual abuse, and discrimination.

It was cases such as Srey Mom's that persuaded the director and co-founder of M'Lop Tapang, Eve Sao Sarin, to help set up the organisation with his partner Maggie Eno back in 2004. M'Lop Tapang is one of six small organisations in Asia partnered by the NGO International Childcare Trust.

"We believed we had to commit to these children, find them a safe place and learn their needs. We also wanted to resolve issues within their families. There are many problems in their homes due to poverty, domestic violence and drug abuse," Sarin explains.

M'Lop Tapang offers a chance for street children to get an education and to change behaviour such as drug abuse and crime, but without the support of their families this is very difficult. As a result the organisation collaborates with the children to deal with their issues at home, setting up services such as alcoholics' counselling and vocational training for their relatives.

Srey Mom has managed to rebuild her home and family with the help of M'Lop Tapang. Srey Mom's father is surprisingly candid. "I drank rice wine so I could forget," he says. "When I was drunk no one else mattered, that is why I could beat my wife and burn my home." He was introduced to an alcoholics' counselling course and is now a skilled builder, earning a stable wage. Similar efforts to build up communities through dedicated social work have been very successful, with every street-living or working child in the town using M'Lop Tapang's services, albeit to varying degrees.

Many of Sihanoukville's social problems can be attributed to Cambodia's recent history. From 1970 to 1975 Cambodia was immersed in a costly civil war, which displaced nearly half the population and killed more than 1 million people. In 1975 the communist movement, the Khmer Rouge, seized power and set about creating a peasant revolution. The majority of the population was forcibly moved to the countryside; healthcare and money were banned and those with an education were executed. In 1979 the regime was toppled, but the war continued and much of the population was displaced. Finally, democratic elections took place in 1993.

For Sarin, the community is "like the basket that breaks. No one trusts each other any more." Children under the age of 18 make up more than 50% of the country's population and Sarin believes that many are still affected by the past.

"Children suffer indirectly from the war, most of their parents lost beloveds, they are depressed and frightened, and Cambodian culture doesn't encourage any show of weakness. They deal with these problems with gambling, drinking and violence."

Vannthy is a social worker with M'Lop Tapang, co-ordinating a network of former street children, who now work in their communities. He is adamant that "young people are the ones that change things. They come up with solutions I would never have thought of." This network has built homes for evicted families, cleared the slums of rubbish and set up awareness programmes on issues such as drug abuse. Its members have also painted and repaired beds at the town hospital and volunteered to teach the English they have learnt at M'Lop Tapang. The Youth Volunteering Network also includes middle-class youth who attend community college and university. These youths volunteer their time at M'Lop Tapang, educate their families and peers on issues such as environment, poverty and social work and encourage social responsibility. The most dedicated volunteers are provided with the opportunity of employment at M'Lop Tapang.

While decades of violence and conflict have affected communities in Cambodia, they have also had an impact on the country's institutions and infrastructure. Andrew Mace is the British ambassador to Cambodia and he has seen weaknesses in the police force and other parts of the public sector. "It is a historical problem," he explains. "The whole of government was essentially destroyed. For example they lost the whole of the judiciary in that period and having lost them it takes a long time to get back that capacity." As a result a new structure of law enforcement was hurriedly created and in some cases recruits were given inadequate training.

Another problem is lack of funding. Social issues receive less attention from international donors than topical concerns such as health and education. Vou Savin, a welfare officer for the Ministry of Social Affairs, is the only government social worker responsible for over 130,000 people living in Sihanoukville and the surrounding countryside. He admits that there is a limit to what he can achieve "Our job is to help vulnerable people, but we have so little money in our department that we need to partner with other organisations."

People coming in from the outside exploit these vulnerabilities to prey on children. Paedophiles see the country as a "safe destination." However, the government is alert to these unwelcome visitors and has forged strong relationships with the NGO community. One such example is Action Pour Les Enfants, an investigation agency working against sex offenders in Cambodia, which has trained up the local police force in areas such as interrogation techniques and forensic evidence. Efforts have also been made to educate law enforcement officials on children's rights and protection against child abuse.

M'Lop Tapang is teaching the children themselves to be aware of the dangers on the streets and to protect one another. They have already trained 40 street children in how to recognise suspicious behaviour and what to do if they see cases of abuse or discrimination. This network then filters the information back to other children. They also act as a safety net for children who are new to the streets. M'Lop Tapang has established a ChildSafe network in Sihanoukville, training local restaurants, bars, hotels and taxi owners to recognise signs and cases of child abuse and report them to its 24-hour ChildSafe hotline.

For Srey Mom, street living is now a thing of the past. She sits calmly surrounded by her family in their small stilted house and although the torrential monsoon rain beats against the tin roof, they remain leak free. She has a stable income working as a manager at the local M'Lop Tapang shop and is a testament to what a street child in Cambodia can achieve.

*Some names have been changed