The Vietnamese economy poses no immediate threat to Thailand, which has healthy investments in that country, says the Thai ambassador in Hanoi. 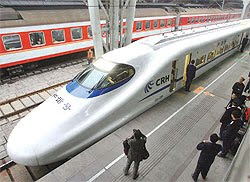 Vietnam said it would put in a high-speed train, similar to the bullet train in Japan, running from Hanoi to Ho Chi Minh City. The news excited Thai readers but most did not realise that work on the railway won’t start until 2036, or nearly 30 years into the future.

However, the ambassador told Thai Rath newspaper, Vietnam has certain advantages including political stability, thanks to its one-party rule and cheap labour.

Nor was Thailand's status as the world's top rice exporter under threat from Vietnam.

Vietnam's rice cultivation area is similar to Thailand's, but Vietnam has a growing population. As its population grows, Vietnam will probably export less rice.

Vietnam's rulers like to talk about their plans for the economy, but sometimes these projects can be many years off.

Vietnam said it would put in a high-speed train, similar to the bullet train in Japan, running from Hanoi to Ho Chi Minh City.

The news excited Thai readers but most did not realise that work on the railway won't start until 2036, or nearly 30 years into the future.

Thailand is ranked 9th among foreign investors in Vietnam. Investment is concentrated in agri-business, cement, real estate, and motorcycle parts.

Food processing including canned fish is another bright prospect for Thai exporters. Several Thai canneries have set up operations in Vietnam and are doing good business.

Sivarak Chutipong, 31, the Thai engineer arrested in Cambodia on a spying charge, is being used as a pawn in the diplomatic dispute between Thailand and Cambodia, argues a Matichon newspaper writer.

He was arrested last week on a spying charge, after he allegedly transmitted the flight schedule of former prime minister Thaksin Shinawatra and Cambodia's premier Hun Sen to Thailand.

The newspaper argues the engineer was a victim of the conflicts between Thailand and Cambodia concerning Hun Sen's appointment of Thaksin as economic adviser.

Suthep argued that Cambodian authorities may have misunderstood the intention of the government, which never intended to inflict any harm.

Yet the Matichon writer was not satisfied with explanations offered by the Thai Foreign Ministry and Samart Telecom in defence of Sivarak.

The government, the writer said, should protect Sivarak's honour and tell international observers that Cambodia's allegations are trumped up.

Cambodia has expelled all Thai staff from Cambodia Air Traffic Services after a Thai engineer on staff was charged with spying.

Cambodia has now ordered all Thai nationals working for CATS to leave the company and prohibited them from re-entering until the legal proceedings against Mr Sivarak are completed, Samart Corporation Plc president Watchai Wilailuck said.

The firm employs nine Thai officials at Cambodian airport, in management or senior engineering positions. About 200 other staff are Cambodians.

Mr Watchai was told Cambodian authorities would send their own people to run the company.

"We need to follow Cambodia's order and are asking the Thai government to negotiate with Cambodia.

'We have nothing to do with their diplomatic dispute, but it is affecting our business," Mr Watchai said.

Thailand and Cambodia are signatories to an investment protection agreement, to protect each other's private businesses.