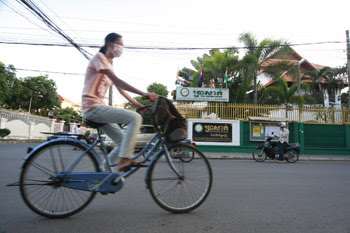 A cyclist rides Thursday past the Phnom Penh head office of Prasac Microfinance Institution, the lender with the highest small-loan growth – 11.11 percent – during the third quarter.

CMA data, which included the country’s 21 MFIs and small loans from ACLEDA Bank, also showed that non-performing loans (NPLs) fell 1.9 percentage points over the period to 1.48 percent, or $8.7 million.

CMA President Hout Ieng Tong attributed the increase in lending, which followed a 2.7 percent drop in outstanding loans in the second quarter, to a combination of positive developments.

“We have seen the economic situation begin to recover, and people have begun to expand their businesses, so they need capital again,” he said. “The slash of interest rates of between 0.2 and 0.5 percentage points by MFIs in early September was also a factor.”

Interest rates are currently between 1.5 and 2.8 percent per month at MFIs, he added.

The improvement in NPL ratios was due to a mixture of repayments and the growth in loan volumes, said Hout Ieng Tong, who is also general director of micro-lender Hattha Kaksekar.

“We forecast that both loan disbursements and non-performing loans will improve in the fourth quarter because it is the harvest season and clients will have money from sales to repay debts,” he said.

The CMA figures show that ACLEDA bank’s outstanding portfolio of small loans rose 5.49 percent to $172.2 million, while its NPL ratio dropped from 1.63 percent in the second quarter to zero at the end of September.

Outstanding loans at Prasac, Cambodia’s largest MFI aside from ACLEDA, grew the most over the period, up 11.11 percent to $56 million. Alongside the increased loan portfolio, NPLs at the lender increased slightly from 1.35 to 1.74 percent.

Amret General Manager Chea Phalarin blamed the lingering effects of the economic slowdown for late payments and said the bank had reduced new lending – despite rising demand – to get the situation under control.

“As a market leader, we are concerned when the NPL rate is up,” he said. “Although the increase is still low, we are vigilant about disbursing new loans,” he said.

Even as total loans increased, the report showed that the number of borrowers dropped 14.7 percent to 883,087 during the third quarter, down from more than 1 million three months earlier.

Do you need a loan to pay off Bills? or to Start a Business emails us now business loan? personal loan? reply to email (urgentloan22@gmail.com)