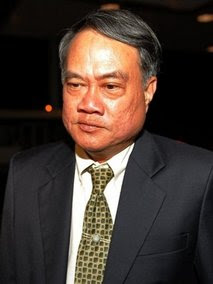 The tit-for-tat withdrawals plunged relations between the neighbouring countries to a new low after they fought a series of deadly clashes during the past year over disputed land around an ancient temple on their border.

The Cambodian government announced the appointment of Thaksin on state television late Wednesday, riling Bangkok as it attempts to bring home the billionaire to face justice three years after he was ousted in a coup.

"We have recalled the ambassador as the first diplomatic retaliation measure to let the Cambodian government know the dissatisfaction of the Thai people," Thai Prime Minister Abhisit Vejjajiva told reporters.

Aid projects and bilateral agreements with Cambodia would be reviewed, but checkpoints on the tense border would remain open, Abhisit added.

Thai foreign ministry official Chavanond Intarakomalyasut told AFP that the appointment of Thaksin "is considered interfering in our internal politics because Thaksin is still actively involved in politics."

Cambodia hit back hours later, with Deputy Prime Minister Sok An saying that it was withdrawing its envoy from Bangkok as a "temporary measure" until Thailand sent its envoy back to Phnom Penh.

Sok An said the recalls would not affect trade or raise tensions along the border.

Twice-elected Thaksin remains a hugely influential figure in Thailand, which has been rocked by years of protests by his red-clad supporters and yellow-clad opponents, including rallies that shut down Bangkok's airports last year.

The one-time policeman is currently living in exile to avoid a two-year jail term for corruption. Bangkok has confiscated his passport, meaning that he travels on documents from other countries, and has issued a warrant for his arrest.

The current saga began in October when outspoken Cambodian Prime Minister Hun Sen offered refuge to Thaksin, and then followed it up at an Asian summit two weeks ago by offering him a job as his finance adviser.

Thaksin said in a Twitter posting that he thanked Hun Sen for the appointment but still wanted to work for Thailand's well-being.

"I thank His Excellency Hun Sen and I just received a copy which was signed by King Sihamoni. It's an honour. But it's not going to be fun like working to help Thai people out of poverty," Thaksin said.

Thailand has urged Cambodia to extradite Thaksin if he enters the neighbouring country, but Cambodia says it will not and that the charges against him were politically motivated.

Relations between the two predominantly Buddhist nations have been strained since July 2008 by the ongoing border conflict over land surrounding an 11th century Cambodian temple after it was granted UN World Heritage status.

The Cambodian military said the situation was calm on the border but that Hun Sen had ordered forces to remain on "high alert" around the disputed Preah Vihear temple, where the two countries last fought in April.

"Cambodia will not invade Thai territory, but if Thai troops enter our territory even one centimetre they will be destroyed," said Chea Dara, deputy commander-in-chief of Cambodia's armed forces.

The Thai and Cambodian prime ministers are both due to attend a mini-summit of leaders from Mekong Basin countries in the Japanese capital Tokyo on Friday and Saturday.

What's up, its fastidious paragraph regarding media print, we all be familiar with media is a great source of data.
Review my homepage ; seo consultant