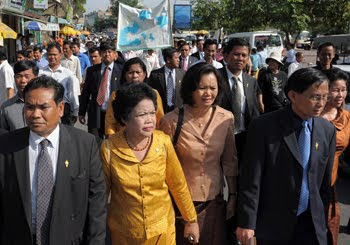 Lawmakers from the opposition Sam Rainsy Party march through Phnom Penh on Monday after boycotting a National Assembly vote that suspended the parliamentary immunity of party leader Sam Rainsy.

OPPOSITION leader Sam Rainsy attended a meeting of the European Parliament in Brussels on Tuesday to discuss the Cambodian human rights situation, a day after his parliamentary immunity was suspended by the National Assembly.

Sam Rainsy told Voice of America prior to the meeting that he would raise a number of issues related to the past year’s crackdown on opposition lawmakers and other government critics.

“I will raise the issue of the suspension of my immunity ... and tell the EU parliament about the violation of human rights and parliamentarians’ rights in Cambodia,” he said.

On Monday, the National Assembly stripped Sam Rainsy of his immunity to pave the way for his prosecution over an incident in which he removed wooden posts that marked the Vietnamese border.

Tith Sothea, a government adviser, said that Sam Rainsy’s allegations in Brussels had often “inflated” information for an international audience in order to gain a political edge on the Cambodian government.

“We already know that opposition leader Sam Rainsy is a provoker who seeks political benefits,” he said.

“I dismiss this accusation – the Cambodian court system is independent from the legislature and executive bodies.”

Sam Rainsy said Monday that in the coming days, he will also meet with the International Parliamentary Union in Geneva and other “friends of Cambodia” to discuss what he termed the country’s ongoing “slide towards totalitarianism”.