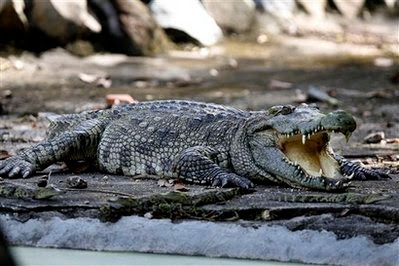 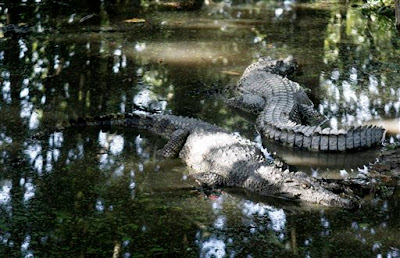 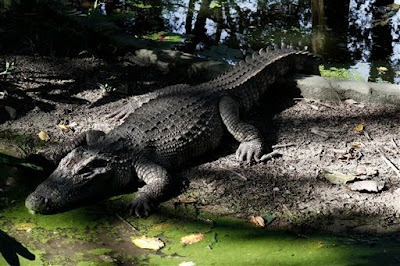 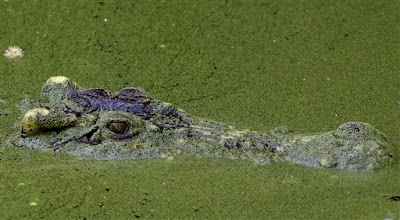 In these photos taken Tuesday, Nov. 17, 2009, a Siamese crocodile is seen at Phnom Tamao Wildlife Rescue Center in Phnom Tamao village, Takoe province, about 45 kilometers (28 miles) south of Phnom Penh, Cambodia. Conservationists searching for one of the world's most endangered crocodiles have found dozens in an unlikely place, a wildlife rescue center in Cambodia. Retrieving DNA from 69 crocodiles housed at Phnom Tamao Wildlife Rescue Center, researchers said Wednesday, Nov. 18, 2009, that they found nearly 50 percent were Siamese crocodiles which until recently were believed to have gone extinct in the wild (AP Photo/Heng Sinith)

BANGKOK – Conservationists searching for one of the world's most endangered crocodile species say they have found dozens of the reptiles lounging in plain sight — at a wildlife rescue center in Cambodia.

DNA taken from 69 crocodiles housed in the moats of the Phnom Tamao Wildlife Rescue Center showed nearly 50 percent were Siamese crocodiles, which until recently were believed to have become extinct in the wild, researchers said Wednesday.

"For the first time in Cambodia, we have a captive population of animals that we know 100 percent are purebred Siamese crocodiles," said Adam Starr, who manages the Cambodian Crocodile Conservation Program, a joint effort between the government and Fauna & Flora International.

Once common throughout Southeast Asia, the Siamese crocodile is locally extinct in 99 percent of the areas it once roamed and is listed as critically endangered by the International Union for Conservation of Nature. Much of the wild population was wiped out by habitat loss and poaching.

Those left in the wild — thought to be less than 250, with nearly all in Cambodia — face the new threat of hydropower dams being built in two of their three known habitats in the country.

Starr said the discovery of the captive population would give conservationists new options for breeding and reintroducing the crocodiles into the wild, most likely in places not affected by the dams. He said up to 60 crocodiles a year could be released into areas they once thrived.

The development provides "a critical lifeline for the long-term preservation of this critically endangered species," said Nhek Ratanapech, the director of the wildlife center.

DNA testing is necessary because it is virtually impossible to tell the difference between Siamese crocodiles and the populations of salt water and hybrid crocodile species that are also housed at the center.

Siamese crocs are said to be a bit smaller at just under 10 feet (3.5 meters) than salt water crocs, and their snouts are narrower.

But the hybrids, for example, often have the same telltale ridges on their necks as the Siamese.