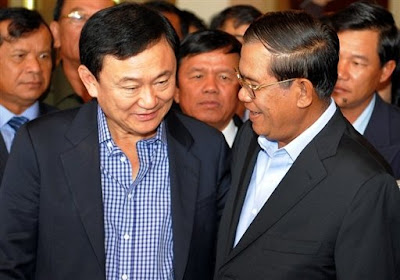 Siwarak Chothipong, 31, an employee at the Cambodia Air Traffic Service, was arrested Thursday on charges of supplying details of Thaksin's flight schedule to his country's embassy when the Thai tycoon visited Phnom Penh last week.

His arrest deepened a diplomatic crisis between the neighbouring countries over Cambodia's appointment of Thaksin as an economic adviser and its refusal to extradite the ousted prime minister to Bangkok.

"The Thai charge d'affaires and three to four embassy officials are visiting Siwarak at prison now and have reported back to the ministry that everything is well," said Chavanond Intarakomalyasut, secretary to the Thai foreign minister.

"He told diplomats that he was well treated. We are asking him about the case details, the charges, how we can defend him and who should be appointed as a lawyer," Chavanond told reporters in Bangkok.

Siwarak was also allowed to talk to his mother in Thailand on the telephone for the first time since he was arrested, Chavanond said.

Thaksin was toppled in a coup in 2006 and is living abroad to avoid a two-year jail term for corruption, but he has been stirring up protests in his homeland against the current Thai government for the past year.

Angered by his presence in Cambodia, Thailand last week put all talks and cooperation programmes with Cambodia on hold and tore up an oil and gas exploration deal signed during Thaksin's time in power.

Tensions were already high between the two countries following a series of deadly military clashes over disputed territory near the 11th century Preah Vihear temple on their shared border.