After taking a bullet in the helmet, he shot his enemy 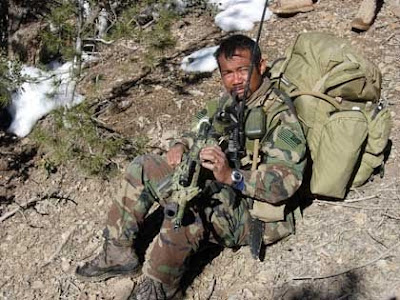 Master Sgt. Sarun Sar takes a break on a mountainside in Afghanistan. Sar, a native of Cambodia, was awarded a Silver Star after he slowed a Taliban ambush in 2005. (Photo courtesy of Sarun Sar)

He is no stranger to war.

Sarun Sar’s first combat experience came in his native Cambodia, where he fought with anti-Vietnamese guerrillas. But when the Vietnamese invaded, his family was split up. His father died in prison, his brother was executed for smuggling weapons for anti-government guerrillas and his mother and two other brothers died from starvation.

Sar ended up on the western side of the country, where he was wounded several times and eventually sent to a refugee camp in Thailand.

There, he met up with his older sister and eventually moved to the United States. Sar gained his citizenship while in the Army and has deployed all over the world with Special Forces to places such as Bosnia, Kosovo, Africa, Colombia and Afghanistan.

In the latter country, he would distinguish himself again.

On March 5, 2005, Sar could see the Taliban fighters running from the village as his Black Hawk helicopter touched down.

“Follow me,” Sar screamed to his 7th Special Forces Group teammates before jumping to the ground, hoping to cut the enemy off.

He could hear radio reports about the team’s other helicopter taking fire as he rushed up the snowy mountain in Paktika province along the Pakistan border. He saw several Taliban running toward some woods. Another ran into a house.

Sar reached the house, throwing himself against a wall near the door and waiting for the rest of his team.

But “I didn’t feel anyone tap me on the shoulder,” said Sar, who was the Special Forces team sergeant, the most senior enlisted soldier.

Looking back down the hill, he saw that his teammates were pinned down by enemy fire. It was just Sar and a medic trapped at the house, far from their unit.

The squat house was made of thick mud and rock with a small door cut out. As Sar peeked inside, thick smoke hung inside the room. He barreled through the small, low opening, gun at the ready, and was halfway in when the flashlight on his M-4 rifle illuminated the face of a Taliban fighter.

The enemy’s muzzle flash lit up the darkness — three times.

Two shots missed. But the third hit the edge of Sar’s Kevlar helmet at his forehead, the force throwing him back out the door.

“I will never forget that little flash I saw,” Sar said. “He was waiting. It felt like I was hit in the head with a hammer.”

Dazed, he rolled back outside and started screaming, “I’m hit! I’m hit!” to the medic. The medic searched for a wound, but the bullet hadn’t penetrated Sar’s helmet. Sar pulled a flash-bang stun grenade and threw it into the room before he re-entered the house and killed the Taliban fighter.

His charge up the mountain had disrupted the Taliban ambush and prevented his team from getting bogged down.

Maj. John Litchfield, the Special Forces team leader at the time, said Sar’s actions also inspired the team to push up the hill.

“The rest of the team was under fire and pretty well pinned down,” Litchfield said. “Human nature takes over, and you start clawing for a piece of ground. Sar did the opposite of that. We certainly wouldn’t have achieved the goal in the same manner, and some of us could have been severely wounded.”

Soon afterward, the Special Forces team cleared the other huts in the village and rounded up a huge cache of enemy weapons, including rocket-propelled grenades, bomb-making materials and explosives. Sar and another soldier were the only wounded Americans.

Looking back to the time on that mountain in 2005, Sar said he wouldn’t change what he did:

“That is how we do things. I would still go in the house. Next time, the whole team would follow behind me.”

Kevin Maurer is a North Carolina-based writer who has traveled to Iraq and Afghanistan to cover military units.