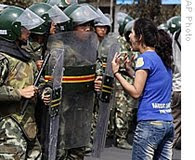 The US joined rights groups on Monday in condemning the forced return to China of 20 Uighur asylum seekers over the weekend.

The Muslim Uighurs had fled after anti-Chinese riots in their home province of Xinjiang in July, but Chinese officials had said they should be returned to face criminal charges.

The US condemned the deportation, which occurred before members’ asylum status could be assessed by the UN’s refugee office in Phnom Penh and on the eve of a visit by Chinese Vice President Xi Jinping.

The US State Department said in a statement the forced return would affect Cambodia’s relationship with the US and its international standing.

Ministry of Foreign Affairs spokesman Kuy Kuong said the move had been conducted under Cambodia’s constitution.

Xi arrived in Cambodia on Sunday to lead a high-level delegation to discuss cooperation between the two nations and “promote common development.”

“The good-neighborly relations between China and Cambodia are in the interests of the two peoples and benefit the peace, stability and prosperity in the region," Xi told the Chinese news agency Xinua on his arrival in Siem Reap.