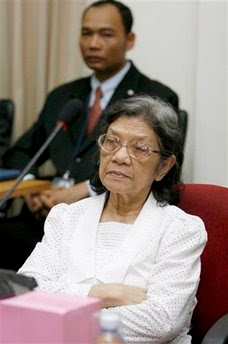 FILE - In this May 21, 2008, file photo, Ieng Thirith, front, a former Khmer Rouge social affairs minister, sits in the dock in the courtroom for a hearing at the U.N.-backed genocide tribunal in Phnom Penh, Cambodia. Ieng Thirith, the last of the former Khmer Rouge leaders standing trial for alleged crimes committed three decades ago, was charged Monday Dec. 21, 2009, with genocide. (AP Photo/Heng Sinith, File)

Ieng Thirith, 78, had already been accused of "murder, imprisonment and other inhumane acts" for her role as social affairs minister in a regime blamed for the deaths of 1.7 million people.

The new charges relate to the slaughter of Cambodia's ethnic Vietnamese and Cham Muslim minorities during the 1975-1979 Khmer Rouge era. The tribunal on Monday also charged her with torture and religious persecution.

Ieng Thirith, a former Shakespeare scholar known as the "Khmer Rouge First Lady", was arrested in November 2007 with her 85-year-old husband and ex-foreign minister Ieng Sary.

The French-educated Communist revolutionaries had lived under a government amnesty granted to Ieng Sary in 1996.

They were the closest associates of Pol Pot, the Khmer Rouge leader who died in 1998. Ieng Thirith's sister, Khieu Ponnary, was married to Pol Pot.

They have also been charged with war crimes and crimes against humanity, along with two other former leaders.

Experts on the Khmer Rouge have been critical of the additional charges, which they said would bog down a trial already criticized for taking too long.

Many of the defendants were in poor health and could die before they see a courtroom, while some cases were already so complex and politicized that they may not even go to trial, the experts said.

The first trial of a senior Khmer Rouge cadre, Kaing Guek Eav, better known as Duch, came to an end three weeks ago. He was accused of overseeing the torture and murder of more than 14,000 people as head of the notorious Tuol Sleng prison.

A verdict in that case is expected by March.