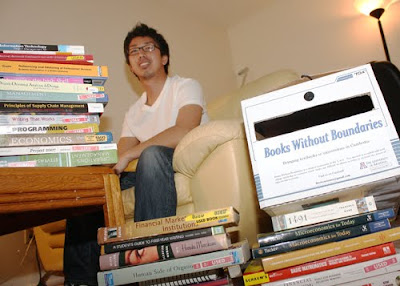 Kyohei Mizokami, a senior majoring in business, is president of Books without Borders, a club that collects textbooks to send to Universities in Cambodia.

A UA club is collecting unwanted textbooks and sending them to schools in Cambodia.

Kyohei Mizokami, a management information systems senior, said he started the club Books Without Boundaries last semester after seeing the number of textbooks being thrown away at the end of the semester.

Mizokami traveled to Cambodia last summer to see if the textbooks could be reused instead of thrown away.

“I thought I could do something, so that’s why I was in Cambodia,” he said.

University students in Cambodia not only have to spend money on expensive textbooks, but also pay the cost of shipping the books to their country, Mizokami said.

“The people in Cambodia order books from the United States or somewhere, so … they have to send them back to Cambodia,” he said.

Mizokami described the condition of one of the libraries he visited in Cambodia, comparing it to the size of Canyon Cafe.

“The library is so small and the shelves are not filled with books, they’re kind of empty spaces,” he said.

The club collected around 70 books last semester and hopes to collect more this semester, Mizokami said. The challenge, he said, is not collecting books, but collecting money to cover the cost of shipping the books to Cambodia.

“We want to send many books this semester. I think collecting books is not difficult. Sending books is more difficult,” he said.

The UofA Bookstore is also trying to make sure unwanted textbooks can be used instead of thrown away. The bookstore sends those books that students cannot sell back to Friends of the Library U.S.A., an organization that helps libraries with limited resources, according to Cindy Hawk, associate direct of the UofA Bookstore.

Each Friends of the Library U.S.A. group sponsors a library in need. The library can either use the books donated by the group or sell them for funding, Jillian Kalonick, marketing and public relations specialist for the Association of Library Trustees, Advocates, Friends and Foundations, said.

Textbooks donated to the libraries, however, are always sold, Kalonick said.

“With textbooks, they will always sell to the general community, and if there’s something they can’t use — they can’t sell to make money for the library — then they would try to find a better home for them,” she said. “They might get donated to local community organizations or to the programs we have in South America or Africa.”

Mizokami said he hopes that students will choose to make a difference with unwanted textbooks instead of throwing them away.

“I would like people to have more awareness — they can do something. Even though here we’re wasting materials, (people in Cambodia) could reuse the them,” he said.