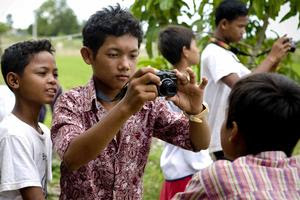 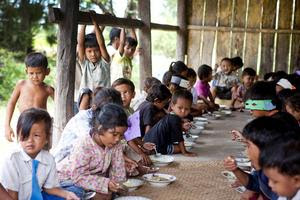 Photo by Barbara Peacock.Only the youngest children are schooled in this Cambodian village. The older children watch them eat. 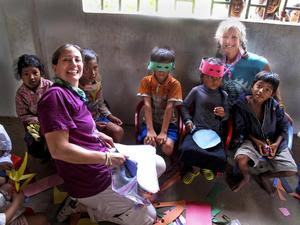 Photo by Barbara Peacock.Artist Tamison Rose and photographer Barbara Peacock teach art in elementary school in Net Apil Teouk, Cambodia on a visit this past summer.

Some held them by the closed blades and looked through the finger loops as if they were silver spectacles Even after being shown how to hold scissors properly, few kids could make a cutting motion.

“It took a while but they caught on and were able to cut some paper and make paper chains and we helped them make masks,” said Barbara Peacock, a Westford photographer who taught art and photography in Cambodia this past summer.

Peacock is a founder of a nonprofit organization called The Nightingale Project, which helps the disadvantaged through art. She was accompanied on her trip to Cambodia by her friend, Tamison Rose, who is an artist and former Westford School Committee member.

They spent two weeks in Cambodia teaching art and photography to children at orphanages near Phnom Penh, the Cambodian capital.

'”People ask us why Cambodia? Besides wanting to visit my son who is there, Cambodia seemed a perfect match for The Nightingale Project, our nonprofit organization. The genocide of the Khmer Rouge systematically killed 85 percent of all professional people. Lawyers, doctors, teachers, scientists and artists were destroyed along with schools, libraries, museums, hospitals and temples. Religion was banned and Buddhist monks killed. If you wore eye glasses you were considered an intellectual and you might be killed. We felt that teaching art in such a country would be greatly needed and welcomed and it was,” Peacock said.

Peacock and Rose met via the Westford Education Foundation (WEF) five years ago when they started “The Big Event,” a fundraiser for WEF. Rose was doing the design work for the interior and Peacock helped. They painted murals for WEF in Ellen Harde’s barn on Main Street.

Peacock was teaching drawing and photography to children at the Buddhist temple in Westford and had help from Rose in the art and photo classes. One of the goals of the teaching was to show that art can be made anywhere with indigenous substances.

Peacock had an inspiration: Why not teach in Cambodia?

“Knowing that my son in Cambodia would be working and busy, and that I would not have all the time to just hang around with him, I thought I could do something there,” Peacock said.

She invited Rose, who was excited by the possibility.

They raised donations locally from Westford residents, including a $500 donation from monk Ajhan David of Wat Buddhahavana of Massachusetts, the Buddhist temple in Westford.

“For artists, travel is important for your inspiration. So both of us felt that an exotic adventure would be feeding the soul. We had a thought that maybe this would be something that we could do and that it could be something self-supporting,” Rose said.

“The Nightingale Project’s mission was to teach art to children in situations where they wouldn’t have that opportunity. That was our baseline,” Peacock said. “So going to the orphanages made sense.”

They visited one orphanage, which had 17 children, all of whom were HIV positive. Others children had been exploited by the sex trade in Cambodia.

Peacock and Rose made their primary focus the orphanage run by the Assistance to Poor Children Agency or APCA. The orphanage, located 40 minutes from PnomPenn, houses more than 70 children, founded by two men who met on the Vietnamese border under the regime of Pol Pot. The two men vowed to do something good together.

“They provide more than room and board. They are emotionally engaged with the kids and are all about learning right and wrong so there is a sense of family,” Rose said.

“We would work with the children in the morning, then have a little rice and soup and go out to the villages. We saw three different villages,” Peacock said.

“At a gathering in one of these villages, I asked what they really needed and a woman said they desperately need a toilet,” Peacock said. “This particular school is far from the homes and the kids would either have to run home to go to the bathroom or go in the bushes and miss their class,” Peacock said.

“We asked how much a toilet would cost to install and was told $150 without running water and $300 with running water and a little sink so they could wash their hands. We had money from the Westford temple and we decided to use that $500 to do something special. So, we just looked at each other and said, ‘we’ll do it.’”

“They announced our gift and all the people from the village came to celebrate our gift. That was a great moment,” Peacock said.

One of the other gifts the two made to the orphans was a collection of illustrated art books.

“We wanted to give them some inspiration after we were gone. Some of these books were for little kids about the ABC’s but were beautifully illustrated. Others were books that displayed the history of art, Asian art, etc.,” Rose said.

Travel with a purpose

“We came away from the experience very inspired. We want now to take people back in what could be called ‘travel with a purpose.’ We have the connections and can make it some fun, with sightseeing and some purposeful activity,” Peacock said.

Peacock and Rose have run local fundraising events including the sale of silks and purses from Cambodia to help benefit their Nightingale Project.

In addition to planning two trips per year to Cambodia, the two women would like to see if they can get Westford “to adopt a village” in Cambodia to help the needy. The adopt a village idea came to Rose after careful consideration of what would do the most good for the Cambodians.

Since their return from Cambodia, they have also sent blankets and pillows back to the orphanage to help the kids cope with an unusually cold winter in Cambodia.

The key to the work that Peacock and Rose are doing is the universal appeal of art.

”Art and the process of creative thinking transcend all cultures and languages. With a few hand gestures, a quick demonstration, some warm smiles and a little singing from Ms. Tamison, the children were able to follow along and create beautiful pieces of art,” Peacock said.

“Merely taking and seeing a digital photograph would produce the biggest look of wonder and massive, joyous smiles. At the end of the day they would say, in well-spoken English, 'I love you in my heart.' And we love them in ours,” Peacock said.