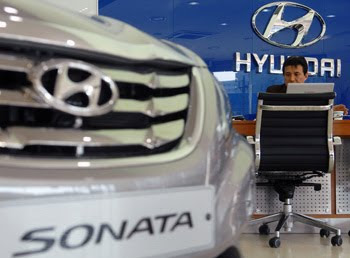 A salesman waits for customers Thursday at a Hyundai dealership in Seoul. The South Korean carmaker will finish its first Cambodia factory in May which won’t go online until year’s end. BLOOMBERG
via CAAI News Media
Friday, 29 January 2010 15:01 Soeun Say
Under-construction Koh Kong plant will not begin assembling vehicles until end of 2010, company says, citing building delays caused by bad weather
HYUNDAI’S planned car assembly plant in Koh Kong will not start operations until the end of the year, it was confirmed Thursday.
The news comes despite denials in October by representatives from Camko Motor Co – which is building the factory in a joint venture between South Korea’s Hyundai distributor KH Motors and Cambodia’s Ly Young Phat Group – of a late 2010 opening.
On Thursday, Lim Visal, the finance director of Camko Motor Co Ltd said the plant will not produce cars until the end of this year.
“We delayed our plans because of the weather in July, August and September, which affected our construction. Work was very slow because of the heavy rain,” said Lim Visal.
“Now, we will start to assemble cars at the end of this year, once we have completed the factory building in May.”
He added that assembly equipment must be installed in the factory before production begins.
“Construction is going smoothly. So far, we have completed the infrastructure work, such as concreting the ground,” he said.
When it is finished the plant will be able to assemble 3,000 cars a year. It is being built by Camko in Neang Kok Koh Kong Special Economic Zone, Mundul Seyma district, Koh Kong province, which is about 370 kilometres southwest of Phnom Penh. The company hopes to invest more than US$60 million in the project.
According to a Bloomberg report Thursday, Hyundai, which is South Korea’s largest automaker, almost quadrupled its annualised profit in the fourth quarter of last year.
Net income rose to 945.5 billion won ($822 million) from 243.5 billion won. Sales gained 9.3 percent in the fourth quarter. Hyundai’s exports made up half of revenue last year.
Chief financial officer for Hyundai, Lee Won Hee, told reporters in Seoul Thursday that sales in China and other emerging markets may grow by at least 10 percent this year, but added: “We expect competition to get tougher this year.”
Heng Vibol, sales manager of Camko, explained that the company opened a Cambodian sales office for Hyundai vehicles – which are currently being imported from Korea – four months ago.
Once production starts in Cambodia, retailers will fight for space on the domestic market before considering exporting vehicles in two years time.
Bun Leurt, governor of Koh Kong province, could not be reached for comment Thursday.
Posted by CAAI News Media at 10:30 pm