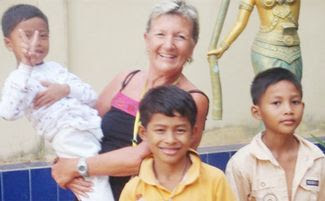 GIVING NEW HOPE: Lennox Head woman Robyn McIntyre with some of the Cambodian children she teaches through her work with welfare organisation New Hope.
via CAAI News Media
18th March 2010
WHEN Robyn McIntyre retired from her job as principal of Lennox Head Public School six years ago, she never imagined she would return to the classroom.
But through welfare organisation New Hope, she now spends time teaching children in Cambodia, giving them a chance at a better life.
“Two years ago, a friend and I went to Cambodia as volunteer tourists,” she said. “We worked at a small, rural school for two weeks and we loved doing that.
“Then I met a Brisbane woman who was setting up a school and a clinic in a village just outside of Siem Reap.
“It’s an area where there are lots of brothels. These are unskilled girls who fall into this kind of work and can’t get out.
“This is a forgotten area. The local people have no food and no medical aid. They forage for worms to eat.
“So this Brisbane woman and a Cambodian man set up a school and a clinic, offering lessons in beauty therapy, sewing, cooking and computers so these people could build up their skills and get other employment.”
Straight away, Ms McIntyre knew that she wanted to be involved with New Hope. After spending six weeks in the village that year, she returned last year for four months as the school’s educational director.
“It’s tough,” she said.
“The first classroom I walked into in Cambodia was a bamboo hut with a dirt floor and no electricity.
“I had sweat pouring off me and insects all over me. But it was wonderful. You find out a lot about yourself, and you have to recognise what you can do to help.
“I’m going back in July for six weeks and I’m really looking forward to it. They are beautiful people.”
The villagers still live in extreme poverty. Ms McIntyre says human trafficking is rife, and many families are so poor they are forced to sell their children to survive.
“I’ve seen evidence of it,” she said.
“I know of one very, very poor family who were offered $2000 for their girls, aged six and nine.
“The girls would have been auctioned off for their virginity.
“But the mother said no and immediately came to see us at New Hope.
“We gave them rice, we looked after them. We said, ‘you don’t have to sell your girls’.
“It’s a dreadful position for these people to be in.
“One boy’s father was going to sell him for $100. That boy is now living in our shelter.”
Although the situation in the village is still desperate, Ms McIntyre has seen ‘huge improvements’ over the past two years.
As an ex-teacher, Ms McIntyre knows that education is the key to a better future. “If between now and when I die, I can make a difference to one person’s life, then my life has been worthwhile,” she said.
“It’s difficult for me when I come back to Australia and I see kids who place no value on their education.
“It is the difference between a good life and a bad one.
“I know kids in Cambodia who would literally cut off their right arm to be able to go to school.
“When I am teaching in Cambodia, my heart sings. So often in an Australian classroom, you are battling.
“But I never dreamed I would be doing something like this.”
New Hope relies on donations to operate, but Ms McIntyre said it was a constant battle. That’s why, when she’s in Australia, she raises awareness of New Hope by giving talks to various groups.
She is available for group talks and can be contacted on 6687 6271.
Posted by CAAI News Media at 8:01 am