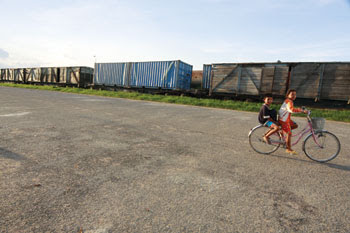 Photo by: Heng Chivoan
Children cycle past dilipidated freight cars on a rail line near Phnom Penh station in October.
--------------------------------------------------------------------------------
Unless immediate action is taken now... and it needs to be now, cumulative funding ... will not deliver."--------------------------------------------------------------------------------
via CAAI News Media
Thursday, 18 March 2010 15:00 Ellie Dyer and May Kunmakara
Australian logistics firm says key infrastructure must be added
THE Kingdom’s railway network needs immediate attention if it is to become commercially viable and sustainable, the head of the Australian partner in the system’s renewal said Wednesday.
Speaking at the Cambodia Outlook Conference in Phnom Penh, David Kerr, CEO of Toll Holdings Group Cambodia (THGC), asked the government to put regulations and infrastructure in place, which are needed to fix the country’s railways.
The network is undergoing a US$141.6 million revamp under a 30-year concession by a joint venture between Toll, Australia’s largest trucking and freight company, and Cambodia’s Royal Group. The first train is scheduled to run in October.
The private sector needs officials to negotiate quicker customs clearances for freight at the borders, direct rail access to containers held at Sihanoukville Autonomous Port and fuel subsidies for the railway concessionaire, Kerr said.
“Unless immediate action is taken now by the Cambodian government, and it needs to be now, cumulative funding from Asia Development Bank, AusAID and the private sector of around $200 million will not deliver,” he said.
This does not mean that trains would cease running on renewed lines, he said, but they would not be economically viable or sustainable in the long term.
Toll’s freight operation would need to make 250 round trips per annum to become economically feasible, he said, a difficult pace to maintain with freight held for customs clearance at borders and ports.
After his presentation, Kerr told the Post that the potential costs of moving containers to a railway carriage without direct port access would be “significant” for the company.
Action needs to be considered now and built into plans to redevelop ports, he said.
Kerr said he has met in recent days with two deputy prime ministers to discuss developments. Representatives from the ADB and AusAID, together with the French and Australian ambassadors, were “heavily involved”, he said.
Touch Chankosal, a secretary of state at the Ministry of Public Works and Transportation, said Wednesday that the government will comply with all the recommendations, which he said have been written into an agreement on the railway provision.
However, he said that negotiations with Thailand to assist with the cross-border customs issues have been temporarily suspended due to the “current situation” between the two nations.
“Whenever the situation is good enough, we will resume our negotiations,” he said. “The company also knows this because we have been working together for a long time.”
The ministry intends to assist negotiations between the company and Sihanoukville port over a rail link, Touch Chankosal said.
“We will play a role as facilitator because [the port] is an autonomous entity which seeks profit,” he said. “So, we will assist them on creating smooth negotiations. However, the result is reliant on agreement made by the two parties.”
Kerr said that Toll’s Cambodian venture would pave the way for an integrated transport network within the Greater Mekong Region.
Posted by CAAI News Media at 10:46 pm