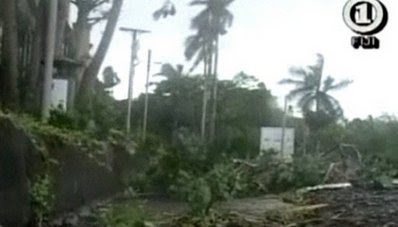 Fiji TV screengrab shows damage caused by Cyclone Tomas. Relief efforts have started after the cyclone devastated areas in the north and east of the Pacific nation, according to officials. (AFP/Fiji TV)

via CAAI News Media
By PITA LIGAIULA, Associated Press
SUVA, Fiji – The South Pacific island nation of Fiji has suffered overwhelming damage from a powerful cyclone that battered its shores for more than three days, the prime minister said Wednesday as relief operations were launched in the country's northern regions.
Fiji sent naval patrol boats laden with supplies and support staff sailing for the northern islands that bore the full brunt of the storm, while Australian and New Zealand air force planes began airlifting emergency supplies to the island group and carrying out surveillance over affected northern areas.
Only one death has been reported, but the full extent of the damage has yet to be determined because communications to the hardest hit areas were cut off for days.
"It is evident that wherever (Cyclone) Tomas has struck, the damage has been overwhelming," Commodore Frank Bainimarama, Fiji's prime minister and military chief, said Wednesday as the first reports began to roll in.
Cyclone Tomas, packing winds of up to 130 mph (205 kph) at its center and gusts of up to 175 mph (280 kph), started hitting Fiji late Friday. It blasted through the northern Lau and Lomaiviti island groups and the northern coast of the second biggest island, Vanua Levu, before losing strength as it moved out to sea Wednesday, the nation's weather office said.
Matt Boterhoven, senior forecaster at Fiji's Tropical Cyclone Center, said "the good news is it's accelerating away from Fiji ... and weakening in the cooler waters."
All storm and strong wind warnings for Fiji have been canceled, he said. Earlier, sea surges of up to 23 feet (7 meters) were reported in the Lau island group, which was hit head-on by the cyclone, he said.
A nationwide curfew was lifted Wednesday, but a state of emergency will remain in effect for 30 days in the country's northern and eastern divisions.
On the northern island of Koro, seven of the 14 villages have been badly damaged, said Julian Hennings, a spokesman for the island's Dere Bay Resort.
"Some of the houses have blown away. A lot of trees have been uprooted, some of the roads have been blocked off because the waves have picked up rocks and coral and have dumped it on the road," he said. One of four landing jetties was also severely damaged.
Tiny Cikobia Island, home to about 400 people, suffered four days of hammering from the cyclone, which smashed houses, uprooted trees, washed away all local boats and scattered debris across the island, Fiji Broadcasting Corp. reported Wednesday.
It received a brief phone call from an unnamed man at Vuninuku village on the island who said damage was so massive that it would take two days to clear the way to the only school near the village.
Before it could get the villager's name, the phone line to the island went dead again, the state-owned station said. A surveillance flight will check the island later Wednesday and a navy patrol boat is expected to reach there Thursday.
National Disaster Management Office spokesman Pajiliai Dobui said aerial surveillance was already under way over some northern islands "and we hope to tell from the air how serious the damage has been."
Offshore islands remained out of all contact "so we have still not got any word about casualties," he said.
Power, water, sewage and communications were still disrupted in many northern areas, but a key airport at Labasa in northern Vanua Levu had reopened for emergency supply flights.
Troops have been deployed to provide relief, including food, water and basic supplies.
Anthony Blake, relief coordinator at the Disaster Management Office, said shelter was top priority after preliminary reports indicated Tomas had caused "extensive damage" to the Lau group and the northern island of Cikobia.
"The people are living in caves at the moment," he said.
A New Zealand air force Hercules airplane that surveyed some northern areas found that "quite a few villages look like they have been hit pretty hard," Squadron Leader Kavae Tamariki told New Zealand's Stuff news Web site.
Many homes had lost their roofs and some houses were destroyed, he said, adding that not many people were seen. "We think they have fled to safety inland," Tamariki said.
Fiji's commissioner for its northern region, Col. Inia Seruratu, who was on board the flight, said he was confident most people were safe since they had received plenty of warning.
Posted by CAAI News Media at 12:24 am