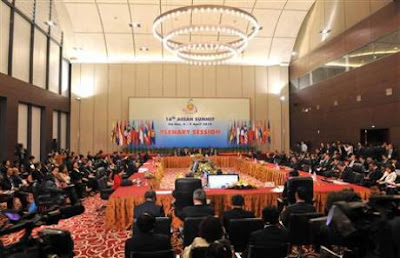 General view of the plenary session of the 16th summit of the Association of Southeast Asian Nations (ASEAN) in Hanoi April 8, 2010. Credit: Reuters/Hoang Dinh Nam/Pool

via CAAI News Media
Bill Tarrant
HANOI
Thu Apr 8, 2010
(Reuters) - Southeast Asian leaders began talks on Thursday about building a strong economic and political community at an annual summit clouded by unrest in Thailand and Myanmar's widely derided election plans.
World
Thai Prime Minister Abhisit Vejjajiva canceled his trip to Hanoi for the Association of Southeast Asian Nations' summit after declaring a state of emergency on Wednesday to control a month-long anti-government protest aimed at forcing an election.
"The situation in Bangkok is worrying," Singapore Foreign Minister George Yeo said. "It is a somber backdrop to our discussions.
It was the second straight year anti-government protests have disrupted an ASEAN summit. Last year ASEAN leaders meeting in a Thai Beach resort had to be evacuated by helicopters when protesters stormed into the venue.
The 10-member ASEAN has been largely focused on economic and diplomatic issues since it was founded in 1967 at the height of the Vietnam War.
But in 2008, it adopted a charter that turned the region of 580 million people with a combined GDP of $2.7 trillion into a rules-based bloc that aims to become a political, economic and security community over the next five years.
Myanmar and its election plans were not on the formal agenda, but as so often happens at ASEAN meetings, the country was occupying the attention of the other nations' leaders, concerned their most truculent member hurts the group's credibility.
Around 100 regional lawmakers urged them in a petition to pressure Myanmar to hold fair and credible polls.
Indonesia and the Philippines have publicly criticized Myanmar's election laws, which ban political prisoners, such as opposition leader Aung San Suu Kyi, from running.
Her National League for Democracy, which won the last election in 1990 by a landslide but was kept from governing, is boycotting this one. That move could make it difficult for the junta to portray the polls as free, fair, inclusive and credible.
Myanmar has so far kept the polling date a secret.
DISPUTE SETTLEMENT MECHANISM
Vietnam's Prime Minister Nguyen Tan Dung told the leaders at the summit's opening that they would adopt a statement on climate change, "sending out ASEAN's strong message on the international negotiating process for an effective climate change regime."
A draft summit declaration states the leaders will also consider when and how to cut back on emergency stimulus measures adopted last year, strengthen the legal framework of their charter, and speed up infrastructure construction.
Foreign ministers on Thursday signed a protocol establishing a dispute settlement mechanism within the Charter to resolve arguments between ASEAN member states, such as over territory.
The terms of reference and procedures are being worked out, and will be finalized at an ASEAN ministerial meeting in July.
"The Charter doesn't limit or stipulate the kind of disputes that would be brought before the dispute resolution mechanism," Indonesian Foreign Minister Marty Natalegawa told reporters.
But he said it would not be used in any country's internal disputes or human rights issues -- in Myanmar, for instance.
"Normally, the dispute settlement mechanism would be interstate, not intrastate, between ASEAN member states. It would be a huge stretch to apply it to a situation within a country," he said when asked if it could be used to pressure Myanmar.
ASEAN has never censured Myanmar over its rights record and is unlikely to do so this time. But summit leaders may indicate to the junta's representative, Prime Minister Thein Sein, that Myanmar is hurting the group's credibility.
"The Myanmar issue still presents a problem when we want to take ASEAN forward to negotiate and deal with other groupings and countries," Thai Foreign Minister Kasit Piromya said. "It presents a major limitation for us."
ASEAN has always taken a gentle approach to the resource-rich country wedged between India and China -- and a half-century ago, one of Asia's most developed nations.
"We are not in a position to punish Myanmar," Yeo said. "ASEAN takes a very realpolitik position, which is that if China and India remain engaged in Myanmar, we have to. It is better that Myanmar remain in the ASEAN sphere than being a buffer state in between the two biggest countries on earth."
ASEAN includes an absolute monarchy in Brunei, the junta in Myanmar, one-party communist states in Laos and Vietnam and robust democracies such the Philippines and Indonesia. Finding common ground is not always easy in this group, which also includes Cambodia, Malaysia, Singapore and Thailand.
(Additional reporting by Ambika Ahuja and Simon Rabinovitch; Editing by Jerry Norton)
Posted by CAAI News Media at 7:31 am