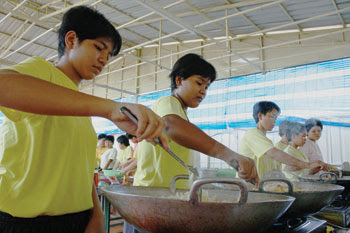 Photo by: Heng Chivoan
People receive employment training at Philimore Cambodia Co Ltd in April 2008 before getting job placements in Malaysia.
va CAAI News Media
Friday, 09 April 2010 15:00 May Kunmakara
Number of workers migrating to Malaysia rise by 80 percent
THE number of Cambodian workers migrating to Malaysia rose more than 80 percent in the first quarter of the year, compared to the same period of 2009, driven by demand for labour in the garment and other manufacturing sectors.
Cambodian government figures also showed a quarter-on-quarter rise in migration to Thailand of 26 percent, indicating the political tension between the countries was not deterring the movement of workers.
More than 3,000 Cambodians travelled to Malaysia for work in the first three months of the year, 2,350 of them women, the Ministry of Labour and Vocational Training reported Thursday.
The total was nearly double the 1,664 workers who migrated to Malaysia for the first quarter of 2009.
“This year, the Malaysian government was wide open for our labourers to work in factories and some other industries, rather that working as housekeepers,” Nhem Kimhouy, an official at the Ministry of Labour, told the Post on Thursday.
“Our government also did not limit the number of companies recruiting workers.”
Malaysian employers favoured Cambodian workers for their patience and obedience of work discipline, as well as a Buddhist faith that did not require frequent prayers, he said.
“We have time to work extra hours, rather than religions that need time to do some worship,” he said, referring to Islam, the official religion of Malaysia.
The number of Cambodians working in Malaysia nearly tripled over the last two years, from 3,432 registered migrants in 2008 to 9,682 in 2009, according to government figures.
Cambodians work in homes, factories and construction sites, earning more than $200 per month.
Cambodia has had legal channels in place since 1997 to help workers reach Malaysia, and the two countries signed an agreement on migrant workers in 2003.
Rithy Sack, chief of administration at CST Human Resources Pte Ltd, said the number of workers sent by his company rose 15 percent quarter on quarter, due to Malaysia’s openness to workers and Cambodia’s efforts to ease unemployment.
Meanwhile, Cambodia sent 701 registered workers, 315 of them women, to Thailand in the first quarter, up from 553 the previous quarter.
“I think that the political deadlock in Bangkok and the border confrontation did not impact the requirements of the work force,” Nhem Kimkouy said. That illustrated a change from last year, when the number of workers travelling to Thailand dipped, he said.
The government allows 22 recruitment agencies and two NGOs to recruit migrant workers for Malaysia and Thailand, twice as many as it had in 2009.
Posted by CAAI News Media at 11:22 pm