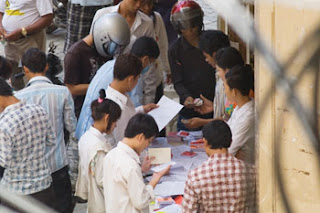 Photo by: Pha Lina
Students buy sheets advertised as containing answers to Grade 12 exams near Baktouk High School in Phnom Penh yesterday
via Khmer NZ
Wednesday, 28 July 2010 15:03 Khouth Sophakchakrya
via Khmer NZ
THE head of the Cambodian Independent Teachers Association yesterday accused officials in Kandal province of ordering teachers administering Grade 12 national exams to take money from students, part of what he described as worsening corruption surrounding the three-day tests.
Rong Chhun said the chief inspector for the Hun Sen Saang exam centre, in Kandal province’s Saang district, had delivered the order to all
exam supervisors.
“The building inspector at the Hun Sen Saang exam centre ordered the proctors to take money from all of the candidates without exception,” and inspectors at the Prek Anchanh exam centre in Mok Kampoul district had taken money from students directly, Rong Chhun said.
Officials at both centres could not be reached yesterday, the second day of the tests. But Uo Eng, deputy director general at the Education Ministry’s General Department of Education, said the government was taking action against all students and teachers who pay and accept bribes. He said he did not have information about the new complaints.
On Monday, the Education Ministry issued a warning against cheating to the roughly 108,000 students scheduled to take the tests, which yesterday covered physics, morality, history and English.
The exams are set to conclude today with mathematics and earth science.
Rong Chhun said that cheating and the paying of bribes were common problems throughout the country during exams, but that the problem seemed to have worsened this year. “Corruption is destroying our education system,” he said.
A student at the capital’s Sisowath High School said yesterday, however, that his plan to purchase exam answers for the day’s tests had gone awry. “The answer sheets I brought into the exam room were wrong,” the 20-year-old student said. “But luckily, the proctors are kind, and accepted our bribe to ignore us as we cheated and copied each other during the exam.”
Several students said yesterday that the bribes they paid teachers varied by subject. Those that are considered the easiest, such as history, involve bribes of 5,000 riels (US$1.20), whereas harder subjects, such as physics and mathematics, involve bribes of 15,000 riels (US$3.57).
Sim Vireak, a teacher of eighth grade at Tuol Svay Prey High School, said that bribes were not specific to the Grade 12 exams, and that they were paid at every level of the school system, beginning in primary school.
He admitted to having sold study guides to students in the past, and said they had contained information not found in textbooks.
“I feel upset and ashamed when I hear parents in my neighbourhood blaming or cursing teachers making money from their children,” he said. “But I have no choice. I have to support my family.”
“It’s better this way,” said one 20-year-old student from Preah Yukunthor High School, also in Phnom Penh. “During the exam, we don’t depend on knowledge. If we did that, we would fail.”
ADDITIONAL REPORTING BY TANG KHYHAY
Posted by CAAI News Media at 11:50 pm