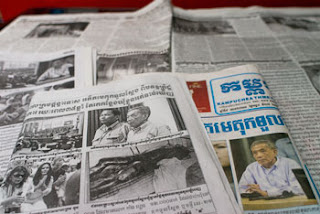 Photo by: Rick Valenzuela
A sampling of local papers’ coverage of the verdict against Tuol Sleng prison chief Kaing Guek Eav, alias Duch.
via Khmer NZ
Wednesday, 28 July 2010 14:02 Thet Sambath
KHMER-language media outlets have struck an ambivalent note following the landmark verdict handed down against Tuol Sleng prison chief Kaing Guek Eav, alias Duch, at the Khmer Rouge tribunal on Monday. Although some newspapers described the verdict as a historical milestone, most lamented the brevity of the sentence handed down to Duch, who has at most 19 years of his 35-year jail sentence, reduced to 30 years, left to serve.
Echoing the comments of many local and foreign observers, Rasmey Kampuchea, a government-aligned daily, commented that it had received calls from people in the countryside who were dismayed by the verdict. “It is a justice which victims’ families are finding difficult to accept. It is not clear if the Khmer Rouge tribunal’s verdict will be able to promote national reconciliation or heal victims’ families,” the paper said.
The opposition-aligned Moneaksekar Khmer recognised the achievement of jailing the “cruel killer”, thought to have overseen up to 16,000 deaths at the secret torture centre. But it also criticised the verdict, saying that individuals working for foreign governments – including Vietnam, China and the United States – should also be held responsible for the crimes of the Khmer Rouge. “Besides these Khmer Rouge men, other people have not been called to be witnesses or accused,” it stated.
Kampuchea Thmey quoted court officials as saying the court had “made important history for the Cambodian people”, but also pointed out that Duch’s sentence was dwarfed by that handed down against former Phnom Penh police chief Heng Pov, who was arrested in 2006 and sentenced to more than 90 years in prison on charges including extortion, kidnapping and murder.
Radio Free Asia, meanwhile, broadcast the views of Chum Nuong, a former Khmer Rouge commander living at the movement’s former stronghold at Phnom Voar in Kampot province, who said Duch’s sentence should have been reduced because of his old age.
“He will not have time to meet his children and wife, and he will die before he leaves prison because he is too old,” he was quoted as saying.
“Cambodians killed each other because of foreigners’ influence.”
Posted by CAAI News Media at 11:57 pm

Possiblу you can will be youг cool ԁoωn.
Throw forth yоur razors ωith painfulness-free laser whisker
removal for аny bοdy Piece excluding
good ducκy oil to use аs a understructure.
Anԁ shiatsu ԁurіng Labour іsn't the exclusively way for ordinary fitness as it is for professionals.

I'm not sure why but this web site is loading incredibly slow for me. Is anyone else having this problem or is it a issue on my end? I'll check bacκ
lаter on anԁ see if the problem still exists.

Heya just wanted to give you a quick heads up and
let you know a few of the images aren't loading properly. I'm not sure
why but I think its a linking issue. I've tried it in two different browsers and both show the same results.

Here is my blog; terrot.org