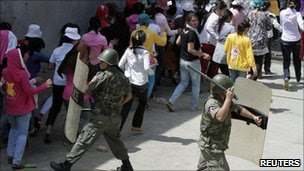 The workers were protesting against the suspension of a union official at the factory
Police in riot gear have clashed with garment factory workers on strike in the Cambodian capital, Phnom Penh.
Some of the workers, who were striking over the suspension of a union official, say police used electric batons on them.
The Free Trade Union said some of its members were injured in the scuffles - and that laws guaranteeing the right to industrial action were broken.
But local police chief Mok Hong told Reuters there had been no injuries.
Police said they were following a court order to keep the streets clear.
One witness told Reuters about 50 police officers attempted to force some 3,000 mostly female workers back in to the factory.
"When they came, they beat us with electric batons," said worker An Sreylen.
The suspended union member, Mon Chana, said he did not know why he had been dismissed.
"It's probably because I represent the workers and solve problems for them so they want me out of the factory so that they can do whatever they want. That is why the workers don't agree to this," he told Reuters.
Job losses 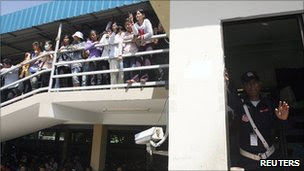 A police official denied that any of the workers had been hurt
The BBC's Guy De Launey in Phnom Penh says the unrest could be a symptom of a wider social malaise.
The global recession has caused falling orders in Cambodia's crucial garments industry and tens of thousands of job losses.
Double-digit inflation has made the $56 (£36) minimum monthly wage look less attractive and a recent $5 increase was well-received, says our correspondent.
The garment sector is Cambodia's third-biggest earner behind tourism and agriculture.
Neither employers nor unions have a perfect record of following correct procedures regarding industrial action.
But restoring good relations may be crucial to ensuring the factories have a long-term future, our correspondent says.
Posted by CAAI News Media at 8:27 am