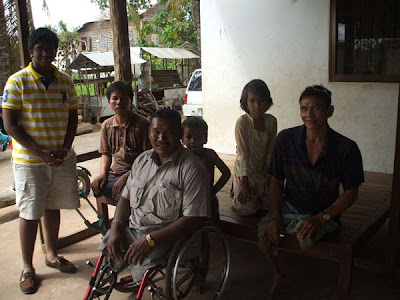 Cambodia is beginning to deal with the legacy of decades of civil war: soldiers and civilians aimed by landmines.


By Akshan deAlwis
via Khmer NZ
By Akshan deAlwis
Akshan deAlwis will be a freshman at Noble and Greenough School in the fall.
I was nine when I read “First They Killed my Father.” It had a profound impact on me and I wanted to learn more about both the glory that was the Khmer civilization and its more recent history of conflict.
Last month, I visited Siem Reap in Cambodia, a city founded upon fable and legend, and more recently tears.
Siem Reap is home to to the majestic Angkor Temple complex. As I drove down the main road from the airport, I watched as hotel upon hotel passed my window, their lights dimly lit in the still of the night.
A large portion of Cambodia’s economy comes from tourism. But Cambodia has not always been a tourist haven. It has actually been one of the most tragic places in the world, and that legacy remains.
Cambodia was plunged into civil war for more than 20 years. A decade of genocide left more than 25,000 combatants and 2 million civilians dead and countless more disabled.
The main reason for my visit was to meet with the Angkor Association for the Disabled (AAD), a meeting arranged through a much admired family friend. At her request, I did a slide show on the rights of children with disabilities as outlined by the United Nations, which she had translated into Khmer and sent to AAD.
The day of my meeting, I woke up at dawn to see the sun rise over the Angkor Wat, the largest Hindu and later Buddhist temple in the world, built by Suryavarman II in the 12th century. It is the proud symbol of the Khmer Culture, depicted on the Cambodian flag. As I quietly tiptoed around the towering spires, the sun slowly burst into the purple sky. I held my breath, afraid to spoil the beauty of the moment.
As the light broke through the still morning, I gasped at the exquisite bas reliefs that brought to life the churning of the sea of milk by the gods and demons to create Amrita, the elixir of life.
The civil war in Cambodia began with the invasion of US and Vietnamese forces in 1969 to attack Viet Cong and Khmer Rouge forces that were using bases in Cambodia. When Saigon fell in 1975, Phnom Penh, the capital of Cambodia, fell to Khmer Rouge forces, who were lead by Pol Pot.
The city was evacuated, and the population was sent to the countryside to work. All things “western” were destroyed. Libraries and temples were ransacked and razed. The agricultural methods were changed to the “Traditional Cambodian Methods” of the 11th century.
In 1979, when a leftist Vietnamese-Cambodian force captured Phnom Penh, the Khmer Rouge began a guerilla war, laying hundreds of land mines. Although the civil war officially ended in 1993, the mines remain.
Cambodia is the third most land mined country in the world. According to UNICEF, “So common are they in Cambodia that they are now used for fishing, or as property security devices, or even to settle domestic disputes.”
According to the Asian Development Bank, close to 10 percent of the
Cambodian adult population is disabled due to malnutrition, violence, and land mines.
After breakfast, I was picked up by the Director of the AAD, Sem Sovantha who drove a car with levers because he is missing both legs.
Sem was a captain in the army, his future ahead of him, until the day he stumbled upon a “double personnel” mine filled with half a pound of TNT. Both of his legs were ripped off.
Most land mine victims are on their own, he said. No one will employ them, hospitals are already overflowing, and families cannot support them with the average annual income of $805
Sem hit the streets, begging. But he knew that things had to change, so he put himself through school and set up the AAD. His goal is simple: to make Cambodia a better place, not through foreign intervention, but through self help.
Sem told me about the new disability law that the Cambodian government recently passed. “The law is only on paper,” he said. "This is our law and we were not consulted.''
The law aims to protect the rights of persons with disabilities and to ensure equal opportunities for persons with disabilities. It provides for accessible education, health care, and employment for persons with disabilities. The law also sets up a council to advise on the administration of the law. While the law is sweeping in its rhetoric, the terms are ambiguous and merely aspirational.
Sem said his organization would be educating police and community officials about the rights all persons with disabilities have to live in dignity and equality.
Sem showed off his group's workshop, where he and others teach peers how to make a living by playing traditional Cambodian music and making woven baskets and small wooden figures. “Work creates the first step to empowerment”, Sem told me proudly.
As the Khmer Rouge trials continue in Phnom Penh, I want those on trial and their judges to remember Sem and his peers. The two million dead are not the only victims of the genocide.
To learn more about Sem, go to his website at: http://www.angkorad.org/
To learn more about contributing to Passport, email Patricia Nealon at pnealon@globe.com
Twitter Digg Yahoo!Buzz ShareThis « Back to front page Previous entry About Passport Dispatches from Boston-area residents as they travel the world.
archives
Select a month August 2010 July 2010 June 2010 May 2010 April 2010 March 2010 February 2010 January 2010 December 2009 November 2009 October 2009 September 2009
browse this blog
by category
Posted by CAAI News Media at 4:08 pm