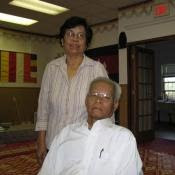 Next month, some of the highest ranking surviving members of the Khmer Rouge go on trial in Cambodia for crimes against humanity. The charges stem from atrocities committed by the Pol Pot regime in the late 1970s...and depicted in the movie "The Killing Fields." This trial is possible, in part, because of the work of Case Western Reserve University international law professor Michael Scharf and his team of law students. Over a period of 4 years they and other experts helped assemble the tribunal that last month scored the first conviction from the killing fields genocide...