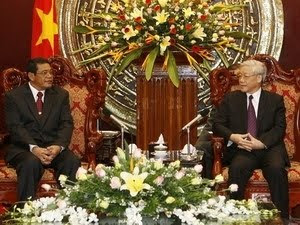 Hanoi, Aug 11 (VNA) – The Vietnamese National Assembly supports exchanges and cooperation with Cambodia in drug control, said NA Chairman Nguyen Phu Trong.
Chairman Trong made the commitment while receiving the visiting delegation of the Cambodian National Committee for Drug Control headed by Deputy Prime Minister and the committee’s Chairman Ke Kim Yan in Hanoi on Aug. 10.
NA Chairman Trong expressed his pleasure at the fine development of cooperation between the two countries in recent years, not only in the economy, trade and investment, but also in fighting crime and drugs.
He informed his guests that Vietnam has carried out many drastic measures to prevent and fight drugs by raising people’s awareness in the danger of drugs, building a strong legal system and developing the drug control programme into a national target programme to mobilise people power. However, Trong added, drug control was a long-lasting and tough fight which needs common efforts and close cooperation between nations, especially neighbouring ones like Vietnam and Cambodia.
Cambodian Deputy PM Ke Kim Yan expressed thanks to the Vietnamese Government and people for effective assistance in many fields, including drug control. The two sides also cooperated in ensuring political security and social order in the border areas between the two countries, he said.
He expressed his wish to learn from Vietnam ’s experiences in national development and affirmed that Cambodia was ready to coordinate with Vietnamese relevant agencies and localities to fight drug evils.
The same day, the Cambodian delegation was received by Vietnamese Deputy Prime Minister Truong Vinh Trong, who is also Chairman of the National Committee for AIDS, Drug and Prostitution Prevention and Control.
Deputy PM Trong briefed the Cambodian delegation about Vietnamese works in drug control and stressed that international cooperation, including coordination with Laos and Cambodia, contributed markedly to reduced trading of drugs across border.
In the area of treatment of drug addicts, Deputy PM Trong said Vietnam had, on a trial basis, used methadone medicine in detoxification in Ho Chi Minh City and Hai Phong city and got good results.
The Cambodian Deputy PM asked Vietnam to help Cambodia build a detoxification centre and share experiences in the treatment of drug addicts in the community and families, as well as train medical experts for Cambodia.
Also on Aug. 10, the Cambodian guests met with Vietnamese Public Security Minister, General Le Hong Anh.
Minister Anh said that cooperation between the Public Security Ministry of Vietnam and the Interior Ministry of Cambodia has been boosted in line with the 1997 Agreement on Cooperation in Crime Prevention and Fighting and brought about practical results.
The Vietnamese minister expressed his hope that in the future the two sides would closely cooperate in protecting national security and building a common border of peace, friendship, stability and development. (VNA)
Posted by CAAI News Media at 12:01 am