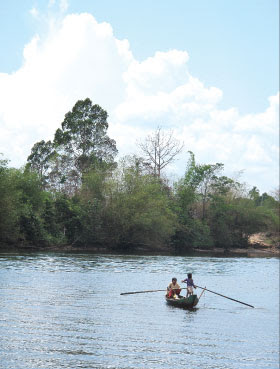 Photo by: Ellie Dyer
Villagers boat across the river in Chi Pat, Koh Kong province, the location of a community-based tourism project. The importance of responsible tourism was emphasised at a conference yesterday.
via CAAI
Thursday, 23 September 2010 19:52 Catherine James and May Kunmakara
CAMBODIA’S tourism sector needs to increase its focus on “responsible tourism” to keep up with foreign travellers and capture a growing market, according to officials from Dutch-backed development agency SNV.
But domestic firms warned against relying too much on sustainable travel to fuel sector growth at the launch of SNV’s Responsible Travel Cambodia pilot project, attended by 70 tourist operators at Phnom Penh’s Intercontinental Hotel yesterday.
The SNV scheme is to provide business mentoring to six tourism companies for six months with the goal of increasing opportunities to capture the burgeoning “responsible” market.
“We don’t want to just eliminate the negative impacts [of tourism] but rather also introduce positive impacts,” said SNV Cambodia sector leader Trevor Piper yesterday.
Responsible tourism aims at maximising economic, social and environmental benefits of tourism, according to the organisation.
Although local operators at yesterday’s event welcomed a potential shift to responsible travel, some cautioned that the movement had not yet become a big player in Cambodia’s tourist market.
“Not a lot of people ask about ecotourism,” said Peau Vanchanphal, manager’s assistant at inbound tour operator Abercrombie and Kent.
“Most tourists just want cultural tourism, like Angkor Wat.”
Kan Lak, manager at domestic firm Nanco Travel, said he agreed that responsible tourism was further down the list of many international visitors’ priorities.
“Responsible tourism is something we want to look at, but at the moment the main demand is for [visits to] Siem Reap, then Phnom Penh and Sihanoukville, and then last ecotourism,” he said.
However, Alexis de Suremain, owner of Phnom Penh hotel The Pavilion, said responsible tourism encompassed more than just eco-friendly destinations, and that an increasing number of tourists prioritised sustainable practices in their travels.
“You have to be aware that this [trend] is something that is happening and it’s happening quickly,” he said, and added that overseas tour operators had asked the hotel about the origin of the timber used to make its furniture to ensure it was eco-friendly.
SNV studies showed demands from the key European and North American markets are changing, Trevor Piper said.
“[Tourists want] more meaningful connections with local people and greater understanding of the local cultural, social and environmental issues”, he said.
Seventy percent of British and North American tourists surveyed by SNV said they would be willing to pay up to $150 more for a two-week stay in a hotel that had a “responsible environmental attitude”.
Tourism is the second largest sector in Cambodia’s economy, contributing US$1.29 billion – up to 15 percent of the country’s total GDP in 2008, according to SNV.
The organisation expects tourism could be worth up to US$1.5 billion by the end of this year.
Ministry of Tourism figures also weighed in to support sustainability at yesterday’s forum. Secretary of state Kousoum Saroeuth said the World Travel Market 2009 survey found that about 71 percent of tourists thought that their travel plans should benefit the local community, and 85 percent thought that trips should have a low environmental impact.
“I would like to encourage all concerned parties, especially the private sector ... to join in with responsible tourism in the context of community development, protection of ecotourism and biodiversity,” he said.
Posted by CAAI News Media at 11:35 pm