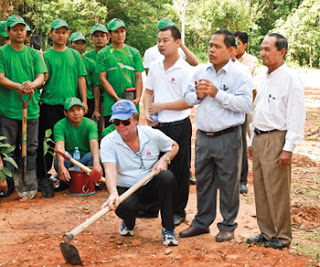 Sokha Angkor Resort’s GM, Emmett McHenry, wields the hoe at Sokha Angkor Resort’s Green Day. Photo by: Nicky Hosford
via CAAI
Friday, 24 September 2010 15:00 Nicky Hosford
“A GREEN day is a happy day!” declares Phe Leak as he watches his green-shirted team prepare for the Sokha Angkor Resort’s annual Green Day. Judging by the non-stop laughter emanating from the team, he must be right.
Phe Leak is the human resources manager for Sokha Angkor Resort and 60 members of staff were involved in the first phase of planting 700 trees around the bridge at Angkor Spean, near Prasat Kravan, on Tuesday morning.
Such a significant tree-planting by a Siem Reap hotel is a sign that environmental awareness is gaining ground in the Kingdom.
The planting is being carried out in cooperation with the Apsara Authority, which donated the trees as well as the instruction on how to plant them. Apsara will also provide the ongoing care for the trees, and almost 40 representatives from Apsara attended.
The trees, called chheuteal in Khmer and hairy-leafed apitong in English, are indigenous to Cambodia and the region, although they are listed as endangered by the International Union for the Conservation of Nature due to habitat encroachment. It is a key planting species for regenerating forests in some parks in Vietnam.
The Apsara Authority says more than 200 different tree species form the most visible part of the natural environment around Angkor Wat, and it takes a team of more than 250 workers to maintain them all year round.
Phe Leak was also conscious that the trees are part of the fabric of the ancient temples of Angkor Wat.
“Angkor Wat is not just Angkor Wat, it is also the environment around Angkor Wat. Trees are the history that grows here.”
The Sokha Angkor Resort Green Day is held annually, with different activities planned each year. But this tree-planting operation is only the beginning.
Emmett McHenry, the green-fingered general manager of the Sokha Angkor Resort, says he hopes other hotels will follow suit with similar operations. Apsara has also donated an additional piece of land so that guests of the hotel can pay to plant their own tree for $50.
Looks like putting down roots in Cambodia is getting easier and easier.
Posted by CAAI News Media at 11:08 pm