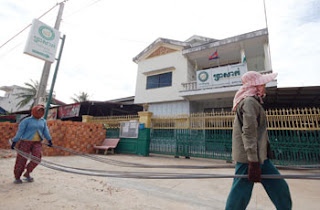 Labourers carry steel past a Prasac microfinance office in Kampot. Photo by: Tracey Shelton
via CAAI
Friday, 24 September 2010 15:01 Nguon Sovan
THE Kingdom’s largest micro-lender, Prasac, will launch deposit-taking services from early next year, representing another step toward its aim of becoming a commercial bank within five years.
The microfinance institution had received a deposit-taking licence for its head office from the National Bank of Cambodia, company officials reported yesterday.
Prasac is currently preparing to launch new services by training employees and applying for processing permits for its network of branches, which are expected to be granted next quarter.
The full deposit-taking scheme will be ready for launch in early 2011, Prasac General Manager Sim Senacheert said yesterday.
He said that the new service would enable the company to diversify products to meet client demand.
“More importantly, it would diversify our funding sources. If we could mobilise more savings we will no longer dependent on the overseas borrowings,” he said.
“Savings are a cheap and sustainable source of funds. Therefore, our funding costs will be lower and as a result we can reduce our lending rates as well.”
Prasac intends to offer the public interest rates of around 9.5 percent and 6.5 percent for one-year deposits in riels and US dollars respectively. Six-month saving deposits would be offered at 7.5 percent and 5 percent respectively.
“The interest rates on deposits we would offer are higher than those offer by commercial banks, but are lower than the rates at which we borrow from our foreign creditors, which charge around 8.2 percent per annum.”
As of end of August, Prasac’s outstanding loan portfolio was US$81 million, lent to 100,344 clients.
Cambodia has 22 MFIs. Prasac is the fifth micro-lender to receive a licence for deposit taking, after Amret, Sathapana, AMK and Hattha Kaksekar Limited.
To obtain a licence an MFI must prove that it has carried out operations for more than three years, is in good financial condition, has capital of at least 10,000 million riels ($2.4 millon), operates an effective management system, uses NBC charts of accounts, and has sustainable profitability.
Posted by CAAI News Media at 11:18 pm