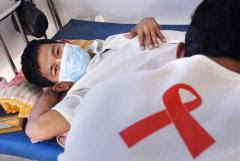 On Monday, via a news release from UN Office in Cambodia, it was learnt that Cambodia has been awarded with a Millennium Development Goals Award due to its national leadership, progress and commitment in attaining a Goal 6, which is working towards combating HIV virus, malaria and other diseases.
It said that Cambodia had been awarded the honor within the Government group of the initiative that is honored with the Award, and it was presented at a prestigious event in New York City, in the U. S.
The efforts that Cambodia has made are concerning HIV that has remarkably helped drop the prevalence of HIV.
The universal access target for treatment has been achieved by Cambodia, with more than 90% adults and kids being offered with antiretroviral therapy, with the help of the Continuum of Care program that had been initiated in the year 2003.
The release also informed that the MDG Awards Committee was very happy and impressed by the endeavors put in by Cambodia, leading the way in combating HIV instances.
Also, it attained success because it sternly followed ‘Three Ones’ guiding principles.
The efforts made have as well had improved impact upon various health-related troubles, and reduced mortality rates amongst kids.
Posted by CAAI News Media at 9:01 am