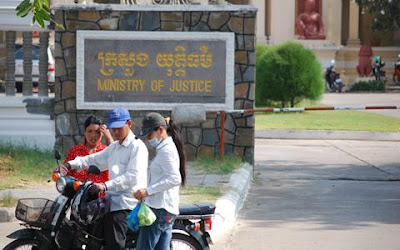 Photo: By Taing Sarada
Ministry of Justice.
“When the law is unclear, it can't be enforced, then it makes people into victims.”
Cambodia is ready to put into effect a new penal code that replaces laws from the Untac era, but lawyers warn that some 300 newly illegal acts could catch people unawares.
The new law, passed last year, will be made effective throughout the country on Nov. 12.
Among other infractions, the new code includes laws against recording phone conversations without permission from the second party, against death threats, public drunkenness, and sexual solicitation via hand waves. It also makes illegal failure to intervene in a suicide in progress; refusal to testify before authorities; and the torture of animals.
“The penal code comprises a total 672 articles, and among some of those articles, we need to take precautions,” said Run Saray, executive director for Legal Aid of Cambodia. “Just a moment ago,” he said, referring to his interview, “there was the issue of recording a voice, which requires permission.”
If the penal code goes ahead as it stands, it will have ignored concerns from civil society over restrictions on the freedoms of expression and assembly.
That includes defamation criminality that could prevent people from speaking out, Run Saray said.
The penal code also remains unclear in certain areas that could provide loopholes for corruption, he said. It also contains “technical words” that could make it difficult to understand by the country's attorneys.
However, he said the new code is good in that it gives more leeway to judges to address cases individually, especially in the abuse of women and children.
Kao Supha, a Cambodian lawyer, said the new code may be difficult for lawyers and judges alike to understand. However, he said it did provide more legal strictures for judges and police.
Sok Sam Oeun, director of the Cambodian Defenders Project, said a code that is difficult to understand will be difficult to follow.
“When the law is unclear, it can't be enforced,” he said. If the law is not properly enforced, “then it makes people into victims,” he said.
It also remains unclear which laws will be stricken from the books and which will remain when the penal code comes into effect, but Kem Sophorn, a judge at the Ministry of Justice, said an implementation law that will be passed soon will clear that up.
Meanwhile, he said, judges, police, prosecutors and clerks have been receiving training on the new penal code.
The code clearly defines newly illegal acts, including provisions for corruption among civil servants, tax evasion, and others, including the torture of animals, he said.
For example, he said, a chicken improperly tied to a motorbike, whose head rubs against the ground, could be grounds for animal torture charges.
Posted by CAAI News Media at 8:53 am