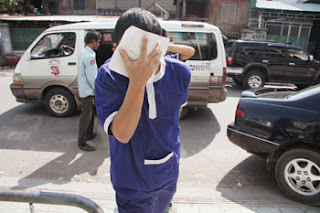 Photo by: Pha Lina
Defrocked monk Neth Kai is led into Phnom Penh Municipal Court ahead of his sentencing.
via CAAI
Thursday, 21 October 2010 21:39 Chrann Chamroeun
PHNOM Penh Municipal Court yesterday found a 35-year-old former monk guilty of distributing pornography and producing child pornography and sentenced him to 17 years in prison, marking the latest development in a scandal reportedly involving the surreptitious filming of hundreds of naked women at a pagoda in Daun Penh district.
Neth Kai, 35, was arrested on June 26 on suspicion of using a mobile phone to record the footage, which was then widely distributed. A total of four women have filed complaints against him.
The court in September handed down a verdict in the first case, which involved one complainant, finding Neth Kai guilty of distributing pornography and sentencing him to one year in prison.
Unlike in the first case, the case before the court yesterday involved two underage complainants, and Neth Kai had been charged with producing child pornography in addition to distributing pornography.
Under Article 41 of the Law on the Suppression of Human Trafficking and Sexual Exploitation, producing child pornography carries a sentence of between five and 10 years.
Nou Navy, a lawyer for one of the two complainants, said after the closed-door hearing that Neth Kai had been sentenced to eight years and six months for crimes committed against both girls.
In total, he has now been sentenced to 18 years in prison.
Judge Din Sivuthy also ordered Neth Kai to pay both girls 50 million riels (US$11,778) in compensation, Nou Navy said.
“It is acceptable and just. The court’s judgment is in accordance with the law. My client was happy and can accept it,” Nou Navy said.
“However, the verdict cannot repair my client’s reputation and shame, for her naked video was sent out by Bluetooth.”
Chea Hay, Neth Kai’s defence lawyer, said he planned to appeal the decision.
“It is very unjust and unacceptable. This is very serious, and the compensation was also too high. There is not enough evidence. My client denied even knowing these two girls or filming them naked,” he said.
Posted by CAAI News Media at 12:14 am