Par for the bourse 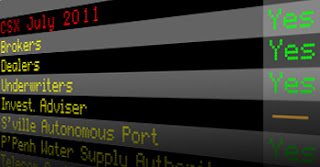 
Sunday, 24 October 2010 19:54 Nguon Sovan and Jeremy Mullins
The Securities and Exchange Commission of Cambodia has issued licences to at least five firms to act as brokers, dealers and underwriters on the Kingdom’s upcoming bourse.
At least three Cambodian banks and two investment banks have confirmed they have been permitted to act on the exchange, which is scheduled launch in July 2011 “at all costs” after being twice delayed, according to the Ministry of Economy and Finance.
Tong Yang Investment Bank chief representative Han Kyung Tae said the firm was preparing to act as an underwriter on the bourse. Underwriters would be authorised to trade, as well as provide advice on issuing securities and facilitate public offerings on the exchange.
“We’re happy with the licence and now we’re working closely with a few potential companies which are preparing for initial public offering,” he said.
ACLEDA Bank has been licensed as a brokerage business, according to Vice President and head of capital market division Svay Hay.
“We have been preparing ourselves for this. Ten staff who are consultants, and senior staff and bank experts will be in charge of this service.”
The firm has been building up experience by conducting its own internal stock market since 2006 to sell shares to its own staff, he said.
OSK Indochina Securities Limited announced it had been granted a licence by the Cambodian stock exchange to act as an underwriter, broker and trader, in a statement filed on the Bursa Malaysia exchange on Friday.
Japanese-owned SBI Phnom Penh Securities Company – the 40 percent owner of Phnom Penh Commercial Bank Limited – announced it had been granted a licence to operate as an underwriter as well as a broker and trader in a release Friday. Canadia Bank has also been granted a permit to act as an underwriter, broker and trader, according to deputy general manager Charles Vann.
Posted by CAAI News Media at 9:11 am