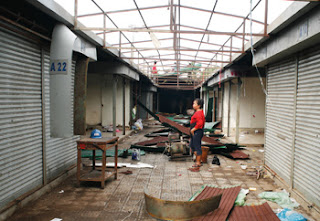 Photo by: Uy Nousereimony
Normal 0 false false false MicrosoftInternetExplorer4 //
A woman stops to watch the dismantling of vendors’ stalls Friday near Olympic Stadium.
via CAAI
Sunday, 24 October 2010 21:32 Chhay Channyda and Sun Narin
Market stalls belonging to vendors near Olympic Stadium were dismantled by police late last week, and vendors have since accused authorities of cordoning off the area to prevent them from collecting their merchandise.
Sok Sambath, who ran a clothing stall in the area, said Prampi Makara district authorities ordered police to disassemble and remove the stalls and their contents on Friday morning.
“We asked them for our possessions, but they wouldn’t give them to us. They said that the possessions would be auctioned off,” she said.
“I was very angry and no longer trust or expect assistance from any authorities who say they will help citizens like us.”
But Prampi Makara district governor Som Sovann indicated yesterday that vendors would be allowed to retrieve their belongings soon.
“The authorities have agreed to the vendors’ proposal and will allow them to take their store materials if they don’t complain or protest,” he said.
He added that authorities continued to pull down other stalls over the weekend, including fruit stands and stores outside the market. He did not specify when the removal operation would be complete.
The eviction came following a decision by the municipality not to continue tolerating the presence of the vendors.
An October 18 letter – composed by Minister of Education Im Sethy and signed off on by other top officials, including Prime Minister Hun Sen – stated that the vendors’ removal had been postponed three times since 2003, and that no further extensions should be granted.
According to the letter, a two-year extension was granted in 2003, a six-month extension was granted in 2007 and a three-month extension was again granted in May of this year.
The letter also states that the Education Ministry assumed control of “the controversial premises” from a Chinese development firm, the Yean Tay Group, in July 2007.
Last Wednesday, about 100 vendors scuffled with police outside Hun Sen’s Phnom Penh villa, where they had gathered to request an additional two-year delay of their removal from the site.
However, Prak Sokhon, a secretary of state at the Council of Ministers, said the vendors had been given ample time to find an alternative location for their stalls.
“It is enough that there should not be any further delay,” he said.
Posted by CAAI News Media at 9:16 am