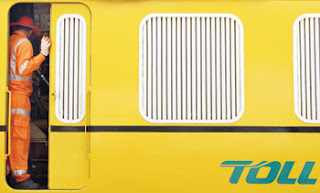 A rail worker inspects the Toll train ahead of its maiden trip from the capital to Kampot on Friday. Photo by: SOVAN PHILONG
via CAAI
Monday, 25 October 2010 15:01 May Kunmakara and Jeremy Mullins
CAMBODIA’S renovated railway could offer freight transport rates below those charged by the domestic trucking industry, but a sector spokesmen said yesterday that competition would not begin in earnest until next year.
Late last week, a 118-kilometre stretch of rail linking Touk Meas, Kampot province, and Phnom Penh, was reopened. It will be run by concessionaire Toll Royal Railways. TRR is 55 percent owned by Australia’s Toll Group, and 45 percent by Cambodia’s Royal Group.
Speaking before the launch, Toll Global Logistics Chief Executive Officer Wayne Hunt said that some Cambodian trucking firms were lowering tariffs in preparation for increased competition from the rail lines.
“Bringing rail freight in as an alternative, you’ll find other transport will bring down their costs. Traditionally, rail would be 10 to 20 percent cheaper than truck,” he said.
Exact pricing changes in Cambodia were not yet clear and awaited the launch of rail service to the Sihanoukville port, he said. But the launch has led trucking representatives and international freight firms to keep an eye on the US$141 million revamp of the Kingdom’s railway – funded by a combination of loans and grants from the Asian Development Bank, OPEC’s development fund, and the governments of Australia, Cambodia and Malaysia.
“The railway has just started operating from Kampot to Phnom Penh – there’s not a large amount of competition right now. At present, [competition from the] railway is not my concern,” said Sok Chheang, executive director of the Cambodian Trucking Association.
Nevertheless, he added that competition from rail would increase when trains were able to travel from the capital to Sihanoukville Autonomous Port, a route slated to open in May 2011.
The association would then study fees charged to move port freight, and members would consider actions such as reducing costs “in the case that railway transport is cheaper”, Sok Chheang said.
Transport and logistics firm TNT Express Worldwide’s Cambodia and Laos general manager, Sjaak de Klein, told the Post that the firm expects rail transportation to compete largely with local transport companies, focused on shipping garments from Phnom Penh to Sihanoukville Port.
More diversified transport firms such as Netherlands-based TNT would consider using rail in Cambodia in the future – but as a part of its service, he said.
“The majority of our customers demand a full door-to-door service, whereas a train network only offers a point-to-point solution,” he said.
Hunt said Toll had invested some $5 million in the railway in the first 12 to 15 months, and added the firm did not expect to turn a profit for two to three years. Toll Royal Railways has also won approval from the Council for Development in Cambodia to invest up to $82 million on 50 wagons, according to officials.
Meanwhile, government officials have welcomed the developments.
Minister of economy and finance, Keat Chhon, said during the official rail relaunch that the railway would play “an important role” in connecting Cambodian freight to the region and the world.
Posted by CAAI News Media at 11:49 pm