Cambodia to hold festival next year despite stampede 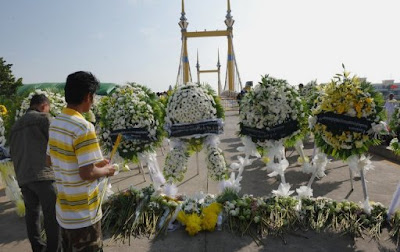 via CAAI
PHNOM PENH — The Cambodian capital will continue to host an annual water festival despite the deaths of nearly 350 people at this year's event in a stampede on a bridge, an official said Friday.
"The ceremony will still be held as usual," said Chea Kean, deputy secretary general of a government festival committee, adding that it was an "age-old tradition" in the country.
He said it was too soon to say whether Cambodia's most popular festival would attract as many visitors next year in the wake of Monday's disaster, in which 347 people lost their lives, 221 of them women.
"Let's wait and see when we get nearer to the event," said Chea Kean.
The three-day event, which marks the reversal of the flow between the Tonle Sap and Mekong rivers, usually draws millions of visitors to the capital to enjoy dragon boat races, fireworks and concerts.
The festival ended in tragedy after crowds panicked on an overcrowded bridge leading to an island that was one of the main event sites.
Authorities said a full report on the incident would be released next week.
Initial findings from an investigating committee suggest the stampede occurred after rumours rippled through the crowd that the suspension bridge to Phnom Penh's Diamond Island was about to collapse.
The crossing, where people have been gathering to mourn and lay out candles, flowers and food offerings for the souls of the deceased, remained closed to the public on Friday although an official has said it will reopen soon.
Prime Minister Hun Sen has described the disaster as Cambodia's worst tragedy since the Khmer Rouge's 1975-1979 reign of terror, which killed up to a quarter of the population.
Posted by CAAI News Media at 7:51 am