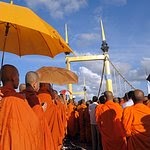 
via CAAI
Thursday was declared a day for national mourning in the honor of the 456 people that were killed in the stampede on Monday night, on the last day of the water festival.
The ceremony was held in front of the suspension bridge and hundreds of Cambodians came with flowers and candles to mourn for those who lost their lives in the stampede. The government declared this Thursday a day for national mourning, following a very dark Wednesday when most of those who had died in the incident were buried by their families.
Memorial services and funerals were held all over the country as family members took their loves ones to be buried in their home provinces. The government promised to help transport the bodies of their loved ones and to pay 5 million riel to every family that lost someone in the incident. The situation is more drastic for other families who still haven’t heard about the fate of their loved ones and do not know whether they are dead or only injured.
On Wednesday government officials issued a statement confirming the fact that the stampede was a result of people’s panicky reaction when crossing the bridge. It seems that the bridge swayed and many of the people on it reacted in panic thinking it would collapse. They started pushing each other and the result was the terrible stampede that killed 456 people and injured more than 800.
The water festival is held every November and it lasts for three whole days. It honors the victory of the Cambodian naval forces during the 12th century and it includes boat races and prayers for a good harvest and rich rain.
Posted by CAAI News Media at 7:48 am