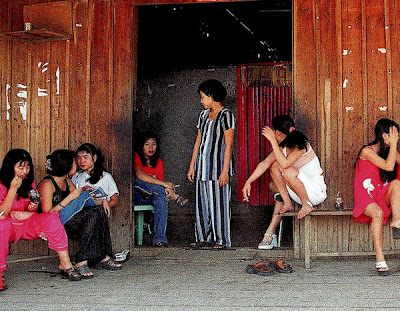 via CAAI
The Irish Times
Saturday, November 27, 2010
MAGAN' WORLD: Manchán Magan’s tales of a travel addict
HOW MUCH for a really good hooker in Cambodia these days? For a young one, just down from her remote mountain village.
As a travel supplement aimed at helping travellers get the best from their holidays it would be remiss of us not to cover this important tourism growth area. After all, 22 per cent of foreign visitors to Cambodia in 2000 were there for sex; no doubt some may have been Irish Times readers. So, in the interests of catering to readers of all tastes, let’s seek out the best value for yam-yam and bam-bam.
It might help first to take a quick glance at international sex trafficking statistics, as a large proportion of Cambodian sex workers are trafficked in from Vietnam and northern Thailand. The pretty little girl you buy is likely to have been either kidnapped by neighbours or sold by desperate relatives for a few hundred euro.
She will probably have been held in the brothel you found her in, or in some squat belonging to the pimp from whom you bought her, but one needn’t think of it as imprisonment.
She is, in theory, free to leave at any time, once she has paid back the expenses incurred in bringing her there. These debts aren’t as terribly crippling as you might imagine – a large proportion will have been cleared in the first few months, when she was first sold as a virgin for top dollar to a few lucky foreigners, after that her value quickly plummets, so that within a few months you could pick her up for less than €50 if you know how to bargain. Or even as low as €10 if you wait until she is strung out on heroin, and possibly infected with HIV.
By then the brothel has little use for her, and would be glad to sell her freedom to you for a nominal fee to cover any remaining charges for room and board, or any abortions she may have had to undergo due to “carelessness”.
It’s odd that although one may go to Cambodia seeking sex, one finds instead a last vestige of slavery, not the brutish, bewhiskered 19th century type involving scurrilous men in knee-length breeches and boots, but something more subtle and innocuous. The United Nations estimates that between 700,000 and 4 million people are cajoled from their homes and sold into slavery worldwide each year. Some 80 per cent are women, girls and young boys trafficked into commercial sexual exploitation. They are lured with false promises of low-skilled jobs in waitressing, modelling or domestic help, at ever younger ages: the average age of trafficked prostitutes in some Asian brothels is 14.
There’s unlikely to be a famous Harriet Tubman or Frederick Douglass-type figure leading an heroic revolution of enslaved sex workers to liberty, because such is the debased status of women in many Asian societies that some will have voluntarily agreed to their enslavement to help feed a hungry family or provide medicine for a sick relative. Once the money has been earned, in theory they are free to return home, but in practise a village community is unlikely to allow them forget their act of generosity. They will be stigmatised, unable to marry. Their sacrifice is for life – although that might not in fact be very long: many die of Aids by their 20s, or are so severely afflicted with post-traumatic stress disorder that they drink or drug themselves to an early grave.
The leading causes of death among trafficked women are homicide, suicide, drug/alcohol related problems and HIV. In fact, the homicide rate among trafficked women is 17 per cent higher then the average.
But, I’ve drifted off-topic. To get back to finding a really good prostitute in Cambodia. First off, I am told it’s best to say you are going on a golfing holiday . . .
Posted by CAAI News Media at 9:56 pm