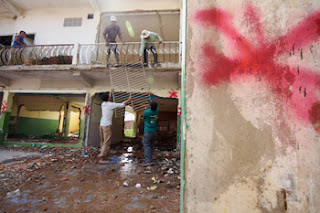 Photo by: Pha Lina
Residents of Village 23 on the edge of Boeung Kak lake dismantle their homes yesterday to make way for a controversial lakeside development
via CAAI
Thursday, 23 December 2010 18:48 Chhay Channyda
Tuol Kork district authorities have given 18 families living in Boeung Kak lake’s Village 23 one week to dismantle their houses, accept compensation and relocate to Dangkor district.
Affected residents say their homes, which lie in the path of a planned access road to the controversial Boeung Kak lake development, will be bulldozed if they fail to meet the deadline.
Resident Ou Norleak, 38, said on Thursday that in a Wednesday meeting between deputy district governor Pich Keo Mony and the families, authorities said they will take drastic measures against those who resist.
“We can’t accept this because we have lived here for years,” Ou Norleak said. “Please Samdech Hun Sen, help your children. We will not be able to build a new house with this compensation.”
Huy Sokhon, another resident from Village 23, described the authorities’ actions as “dictatorship”.
In October, district governor Seng Ratanak told the families to remove their homes and accept a land plot in Dangkor district and 1 million riels (US$250), to make way for the widening of the access road R8 by developer Shukaku Inc.
Ek Yoeun, an official at the Tuol Kork district office, said Thursday that he did not join the meeting, but claimed the authorities had increased the compensation payout to 5 million riels ($1,250), up from the previous offer of 1 million.
“I heard some people asked for $50,000. The government’s policy is only to give a land plot in Kork Ksach village [in Dangkor district] and a small amount of money,” he said.
Posted by CAAI News Media at 9:50 pm